The “New Cold War” is No Longer Cold: NATO Expands Military Presence along Russia’s Border, Lying All the Way to Barbarossa II 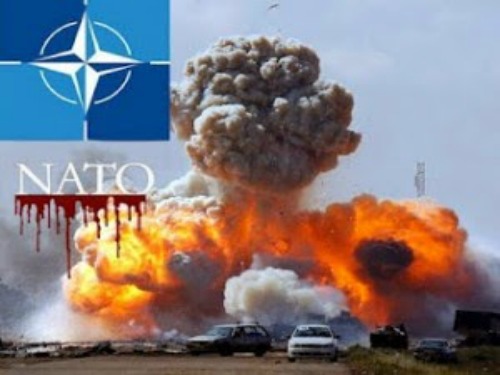 Despite claims made during NATO Summit Warsaw 2016, that “NATO remains a fundamental source of security for our people, and stability for the wider world,” it is clear that the threats and challenges NATO poses as existing to confront are in fact threats of its own, intentional creation and continued perpetuation.
From the ongoing refugee crisis triggered by NATO’s own global-spanning and ongoing military interventions, invasions, and occupations, to its continued expansion along Russia’s borders – violating every convention and “norm” that existed during the Cold War to keep it “cold,” NATO has proven that it is to the populations it poses as protector over, in fact, their greatest threat.
In particular, the summit in Warsaw, Poland centered on NATO’s expanding military presence along Russia’s borders, particularly in the Baltic nations of Estonia, Latvia, and Lithuania, as well as in Poland itself.
The summit also covered ongoing NATO involvement in Afghanistan and Iraq, two nations so far beyond the Atlantic states the alliance allegedly was founded to protect, it would be comical if the consequences of their far-reaching meddling weren’t so serious.
Belligerence Vs Balance

Global peace and stability is tenuously maintained through a careful balancing act between conflicting centers of power. The story of human history is that of this balancing act being performed.
World War II, which gave way to the current international order we live in, came about because of a fundamental failure to maintain this balancing act.
Perhaps the most troublesome aspect of World War II’s genesis, was the German military build-up along the then Soviet Union’s borders characterized by Berlin at the time as a means of collective defense for Europe, when in fact it was the lead up to a full-scale invasion known now as “Operation Barbarossa.” It is troublesome particularly because NATO is currently building up its forces in almost precisely the same areas and in almost precisely the same manner Nazi Germany did in the 1930s.
When German forces crossed into Russia on June 22, 1941, a potential balance of power meant to preserve Germany and the rest of Europe against perceived Soviet menace turned into a war that devastated both Europe and Russia.

The subsequent Cold War is an example of a balancing act of power being performed mostly with success. However, despite many common misconceptions regarding the Cold War, the mere existence of opposing nuclear arsenals and the concept of mutually assured destruction was not why balance was maintained.
Instead, balance was maintained by an immense framework, painstakingly constructed by both American and Soviet leaders, at the cost of both nations’ egos, pride, and interests and involved everything from agreements about the weaponization of space, to the composition and deployment of their nuclear arsenals, and even regarding defense systems designed to protect against nuclear first strikes.
There were also specific and complex agreements arranged over the deployment of troops along each respective center of powers’ borders, including the borders of nations that existed within their spheres of influence.
It was clear during the Cold War that both Washington and Moscow vied to expand their respective reach over the rest of the world, resulting in proxy wars everywhere from the Middle East to South America, and from Africa to Asia in a “low-intensity” bid – relative to all-out nuclear war – to gain the upper-hand.
Preceding and in the wake of the Soviet Union’s collapse, tentacles of Western influence had finally prevailed, and reached deep within Russia itself, eroding not only Russia’s own institutions and national sovereignty, but unsettling the global balance of power that had existed for decades after World War II.
It was only during the rise of Russian President Vladimir Putin that this trend was reversed and something resembling global balance reemerged.
It was clear that during the early 2000’s, whatever progress the US had made in dismantling the remnants of Soviet checks to its otherwise unlimited desire for global hegemony, would need to come to an end, and a new framework mirroring that of the Cold War, established to accommodate emerging global powers including the Russian Federation
But this is not what happened.

The New Build-Up
Instead, under the administration of US President George Bush and continued under that of President Barack Obama, the Anti-Ballistic Missile Treaty (ABM Treaty or ABMT) was unilaterally withdrawn from by the United States.
Additionally, the United States – beginning in the 1990s and continuing until today as seen in Ukraine – has funded and backed various political coups across Eastern Europe under the guise of “promoting democracy,” installing client states along Russia’s borders. Attempts to undermine and overthrow governments continues in nations like Belarus and Azerbaijan, as well as the Central Asian states of Turkmenistan, Kazakhstan, Kyrgyzstan, Tajikistan, and Uzbekistan.
Nations successfully overthrown and co-opted by Washington have been systematically turned against Russia economically, politically, and militarily. These nations are almost immediately folded into NATO’s military alliance. In 2008 for example, the US client regime in Georgia would invade the Russian-backed republic of South Ossetia, precipitating a full-scale Russian response in what many believe was a NATO attempt to test Russian resolve. It is reminiscent of Nazi-Soviet geopolitical jousting in Finland just before Operation Barbarossa commenced.
Ukraine, overthrown in a NATO-backed putsch between 2013-2014, has also taken a hostile posture toward Russia, and again, Western military aggression, seeking Ukraine as a vector through which to strike deeper at Russia is a direct replay of events that unfolded during World War II.
The story of NATO post-Cold War has been one of confrontation, not of fostering security or stability.
Instead of working on a new framework to establish global stability by recognizing a new emerging balance of power between East and West, NATO has attempted to “race” in a reckless bid to expand its own influence as far and wide as possible before this balance of power establishes itself through the realities of military, political, and economic force
It appears that NATO may even be contemplating the destabilization and overthrow of the political order in Moscow itself with attempts to foster terrorism in Russia’s southern regions through massive NATO-backed conflicts in Syria, Iraq, and Afghanistan, as well as the funding and support of hostile political fronts all across Russia.

A Gradient of Balance Versus a New Cold War
The Cold War was characterized by two distinct centers of power with little room for nations to deal in anything resembling an intermediary sphere of influence.
Today, very easily, a gradient of balance can be established between North America, Europe, Russia, and Asia – where the best benefits of dealing with each other could be enjoyed by all. The only requirements would be first allowing Europe to develop a foreign policy that reflected the best interests of its own governments, people, and industry, and second, the ability for Washington, London, and Brussels to abandon their unrealistic designs toward global hegemony and opt instead for a more realistic balance of multipolar power.
NATO precludes all of this – effectively coercing Europe into a zero sum game with Russia, just as it had done during the Cold War.
Europe faces many threats. But none of them from Russia. It is flooded by refugees fleeing NATO wars. It is weathering instability in nations like Ukraine, whose political order was upended by NATO-backed political violence. And Europe is plagued by the irresponsible, reckless actions of prospective NATO members like Georgia, run by incompetent regimes installed by and for Washington’s best interests, not the stability and long-term interests of the European people.
Europe’s leadership has clearly demonstrated no interest in recognizing these realities. It will be up to the European people themselves to demand a more rational shift away from the various, intentionally manipulative strategies of tension NATO has cultivated, and toward a more sensible and independent relationship with the world beyond the Atlantic alliance.
There has been much talk of Britain’s leaving of the European Union. Perhaps it is time for the European Union to leave the long and corrosive influence of Anglo-American interests and institutions.
Until then, the people of Europe should examine closely the lessons of history of aggressive expansion toward Russia’s borders, the lies such expansion was predicated upon, and the consequences those lies had on the security and stability of Europe when finally they were exposed through the unfolding conspiracy they were designed to obfuscate.
The wheel of history turns not because our hands are on it, turning it, but because our apathy and ignorance has prevented our hands from stopping it.