Jump media player
Media player help
Out of media player. Press enter to return or tab to continue.
In 2012 James Foley told the BBC about the importance of journalists in the frontline at an event to raise money for a colleague who was killed in Libya
Continue reading the main story

The Islamic State militant group has released a video online purporting to show the beheading of US journalist James Foley, missing since 2012.
The militants said the killing was revenge for US air strikes against the Islamic State group in Iraq.
Foley's mother Diane said on Facebook she was proud of her son: "He gave his life trying to expose the world to the suffering of the Syrian people."
The White House said if the video was genuine, the US would be "appalled".

If (the video is) genuine, we are appalled by the brutal murder of an innocent American journalist”

Caitlin Hayden US security spokeswoman
Foley has reported extensively across the Middle East, working for America's Global Post and other media outlets including the French news agency AFP.
'Second prisoner' In the video titled A Message to America, a man who appears to be James Foley is dressed in orange kneeling in desert-like terrain beside an armed man dressed in black.
The militant, who speaks with a British accent and identifies himself as an IS member, says the journalist's death is the direct result of US bombing of IS targets in Iraq.
In a statement, the Global Post asked for "prayers for Jim and his family", adding that it was waiting for the video to be verified. 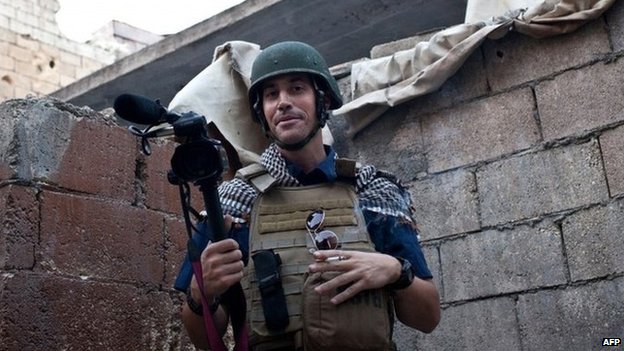 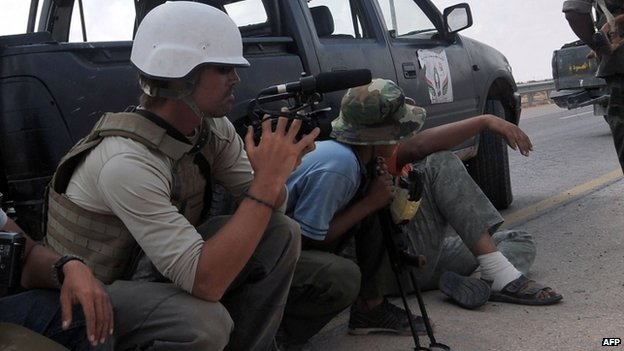 James Foley has worked for a number of media outlets, travelling across the Middle East 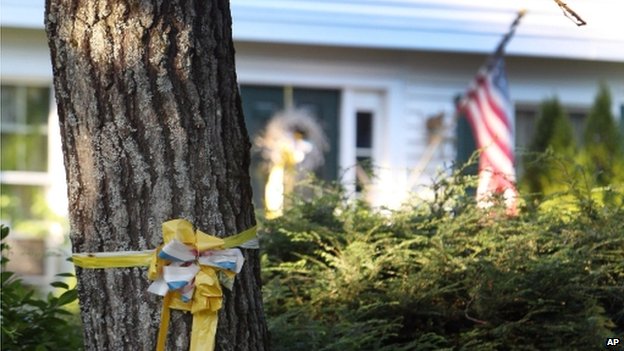 A ribbon is tied to a tree outside James Foley's house in Rochester, New Hampshire
In a 2012 interview with the BBC, Foley described his motivation for covering conflicts.
"I'm drawn to the drama of the conflict and trying to expose untold stories," he said.
"There's extreme violence, but there's a will to find who these people really are... And I think that's what's really inspiring about it".
Foley was also briefly detained in Libya in 2011.
US officials confirmed that they had seen the video and were trying to establish its authenticity.
President Barack Obama had also been informed.
White House National Security Council spokeswoman Caitlin Hayden said: "If genuine, we are appalled by the brutal murder of an innocent American journalist and we express our deepest condolences to his family and friends."
The footage claimed to have been released by the IS also shows another prisoner identified by the militants as an American reporter.
Mrs Foley, in her Facebook post, urged the militants to free any other hostages.
"Like Jim, they are innocents. They have no control over American government policy in Iraq, Syria or anywhere in the world," she wrote.
The militant group has been accused of massacring hundreds of people in areas under their control in Iraq and also in eastern Syria.
The violence has displaced an estimated 1.2 million people in Iraq alone.
Pursuing an extreme form of Sunni Islam, IS has persecuted non-Muslims such as Yazidis and Christians, as well as Shia Muslims, whom it regards as heretics.
Posted by --------------------------------------- at 8:46 PM