“This Is Not a Drill”: Collapsing Dam Forces 200,000 to Evacuate With Floods Still Coming

“This Is Not a Drill”: Collapsing Dam Forces 200,000 to Evacuate With Floods Still Coming 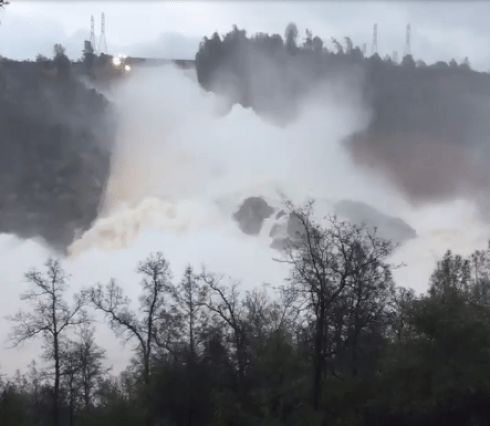 via Sean Bennett @tvseanb on Twitter
The overflow of a faulty dam and emergency spillway has created an ongoing emergency in Oroville, while is about an hour and half north of Sacramento.
Flood waters have already breached the spillway from the tallest dam in the entire United States. Ironically, the flooding dam comes after an intense five-year drought that nearly wiped out California, only for heavy rains to bring many of California’s water reservoirs back to – and over – capacity.
Now, emergency officials are doubling down on the need to evacuate people from the area, and prepare to mitigate extensive flooding damage if the situation should erupt into a larger problem. Good reason to stay prepared, and ready to bug out or survive without food, water or
In the worst case scenario, officials predict that within a matter of hours, the entire town of Oroville could be covered in waters as high as 100 feet, while the floods would traverse towards Yuba City, some 30 miles south where they could see flood waters as high as 10 feet. Several other towns in between could also be heavily flooded.
via the Daily Mail:


A gaping 250-foot chasm was expected to collapse and unleash a 30ft ‘tsunami’ tidal wave that could have killed thousands and left nearby towns under 100ft of flood water.Tens of thousands of panicked residents took to the freeways, causing total gridlock on the roads and sending anxiety levels soaring as they wondered if the dam would burst while they were sat in their cars.
‘Everyone was running around; it was pure chaos,’ Oroville resident Maggie Cabral told CNN affiliate KFSN on Sunday.
‘All of the streets were immediately packed with cars, people in my neighborhood grabbing what they could and running out the door and leaving. I mean, even here in Chico, there’s just traffic everywhere.’

‘THIS IS NOT A DRILL’: Residents in areas of Oroville, Calif. ordered to evacuate as dam is predicted to failpic.twitter.com/b49uOFvDDt
— Breaking911 Nature (@B911Nature) February 13, 2017


“Around 3pm we were advised of a hole that was developing near the lower edge of the alternative slash emergency spillway, which has been used to reduce the level of the lake given that the main spillway was damaged a couple days ago,” Sheriff Kory Honea told a press conference, adding that he was advised of the “imminent danger” that it would collapse.
Explaining his decision to promptly evacuate the area, the sheriff said the authorities had “significant concern that [the erosion] would compromise the integrity of the spillway.”
“We had to make a very critical and difficult decision to initiate evacuation,” he said, adding that he “could not risk the lives of thousands of people.”
Officials are set to re-evaluate the evacuation orders at dawn, Reuters reported.
Measuring 770 feet (230 meters) high, the Oroville dam is the tallest dam in the United States. It exceeds the Hoover Dam by more than 40 feet (12 meters).

Assuming that this area dodges a bullet, and avoids total disaster, it still a part of California which seems to be facing the worst of luck.
With extensive drought comes risk of water rationing, skyrocketing prices and a threat to agricultural production; with extensive rains, come dangerous flooding which obvious California is not prepared to handle.
It seems that all extremes have impacted California harshly, and it continues to be a risky area, particularly for those dependent upon large metropolitan areas. Regardless, heavy taxation, dense population, thick traffic and a vengeance from Mother Nature have not made for appealing circumstances.
Read more:
The Prepper’s Blueprint: Solidly prepared for any emergency, natural or manmade
NASA Warns California Drought Could Threaten U.S. Food Supply: “There will be some definite changes”
Water Wars: What It Will Be Like When Your Tap Runs Dry
FedGov Moves To Seize Water Rights From 100,000 Montanans: “All Surface Water And Wells”
Video: The Coming Global Water Crisis

Please Spread The Word And Share This Post
Author: Mac Slavo
Views: Read by 3,566 people
Date: February 13th, 2017
Website: www.SHTFplan.com
Copyright Information: Copyright SHTFplan and Mac Slavo. This content may be freely reproduced in full or in part in digital form with full attribution to the author and a link to www.shtfplan.com. Please contact us for permission to reproduce this content in other media formats.
Posted by --------------------------------------- at 5:44 PM