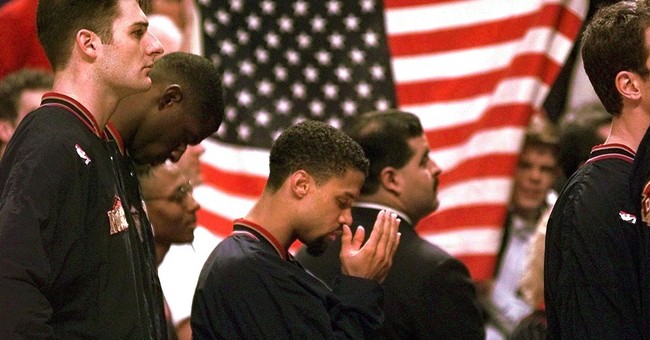 Trending
National Review has sparked an important debate about nationalism. As someone who has been accused throughout her life of excessive love of country (can't count the number of times I've been reproached for arguing that despite slavery, Jim Crow and the internment of Japanese-Americans, our country is eminently lovable), I feel a bit awkward rebutting anything that travels under the name "Love of Country." Nevertheless, I must join Jonah Goldberg, Yuval Levin, Ben Shapiro and others in demurring from Rich Lowry and Ramesh Ponnuru's defense of nationalism.Lowry and Ponnuru are two of the writers I most admire (at a time when that group is shrinking fast). If they make an argument with which I disagree, I'm inclined to question my own judgment. So I remain open to the possibility that they are right. But it seems to me that their willingness to believe that nationalism, as opposed to patriotism, can be benign is not convincing.
Everything they assert about the naturalness of nationalism -- it arises out of the same soil as love of family, community, church, etc. -- is true of patriotism. It's true, as Lowry and Ponnuru note, that the left has discredited itself over the years by its hostility to sincere patriotism.
Patriotism is enough -- it needs no improving or expanding.
Nationalism is something else. It's hard to think of a nationalist who does not pervert patriotism into something aggressive -- against foreign adversaries, domestic minorities or both. When Mexican President Lazaro Cardenas nationalized the oil industry in 1938 (expropriating the property of hated foreigners), he was favored with a chanting crowd of 100,000 supporters in Mexico City. Gamal Abdel Nasser's nationalism found expression in nationalization (of the Suez Canal in that case) and also in aggressive war against Israel and Yemen. Vladimir Putin's nationalism has been characterized by demonization of the United States in domestic propaganda and his invasion of neighboring countries. Benito Mussolini believed in reclaiming Italy's lost glory and invaded Abyssinia (Ethiopia) to fulfill his vision.

CARTOONS | Chip Bok
View Cartoon
Our own history is not pristine. We've had our moments of belligerent nationalism. The Mexican-American War, for example, was a pure land grab. Lowry and Ponnuru cite President Lincoln as an example of a benign nationalist, but he recognized corrupt nationalism in his own time. As a member of Congress, he deplored the Mexican-American War in the strongest terms, accusing President Polk of misleading the public about on whose territory hostilities began, and thundering, "The blood of this war, like the blood of Abel, is crying to Heaven." I'm not proposing that we return California to the Mexicans (though, considering their voting patterns, it's tempting), but the war that brought California (and other states) into our union was not our finest hour. It was, arguably, the hour of maximal American nationalism.
I believe that nationalism is a demagogue's patriotism. Demagogues of the right and left both play upon natural and even benevolent instincts for their own purposes. The left's demagogues distort love of justice and equality into a leveling desire to scapegoat others. Bernie Sanders doesn't just appeal to people's desire for fairness; he encourages them to believe that they are the victims of the "1 percent," who are siphoning all of the nation's wealth for themselves. If you are poor, Sanders claims, it is because someone who is rich has taken your share.
Demagogues of the right -- or nationalists -- argue that our troubles are the result of immigrants taking our jobs or foreigners stealing our factories. This is not natural love of home and hearth or reverence for America's founding ideals. It is scapegoating.
Which brings us to the proximate cause of this debate: President Trump. Far from deepening our appreciation of our history or institutions, he embodies the reasons to be wary of demagoguery in the name of country. In him we see strutting nationalism ("America first!") but little true patriotism. He claims to pursue America's interests, yet has shockingly little respect for the nation he heads. He doesn't love the country enough to have familiarized himself with the basics of our system. In one debate, he said judges "sign bills," and in a Capitol Hill meeting with congressmen, he praised Article XII of the Constitution. What patriot can claim that we lack the moral authority to criticize Turkey's crackdown on independent journalists, or impugn this country as no better than Russia when it comes to political assassination? As Trump demonstrates, nationalism is not patriotism in a hurry; it is resentment draped in the flag.
In his concurrence with Lowry/Ponnuru, John O'Sullivan indirectly makes a similar point, defending Trump's disavowal of American exceptionalism. O'Sullivan offers that this is delicacy on Trump's part. "He doesn't want to humiliate the foreigners who will shortly be losing to America. ... When you intend to shoot a man, it costs nothing to be polite."
That's not my idea of patriotism.