War With China? Effects Of A U.S. Blockade In The South China Sea

War With China? Effects Of A U.S. Blockade In The South China Sea

Anders Corr ,
Contributor
I cover international politics, security and political risk.
Opinions expressed by Forbes Contributors are their own.

“Chinese and Western experts” say a blockade by the U.S. in the South China Sea of China's artificial islands would be an "act of war" according to breathless Wall Street Journal reporters. The New York Times says unnamed “American Navy experts” are calling a blockade “tantamount to war”. Association of a U.S. blockade with war is an incomplete truth at best, and a scare tactic that plays into China's hands. 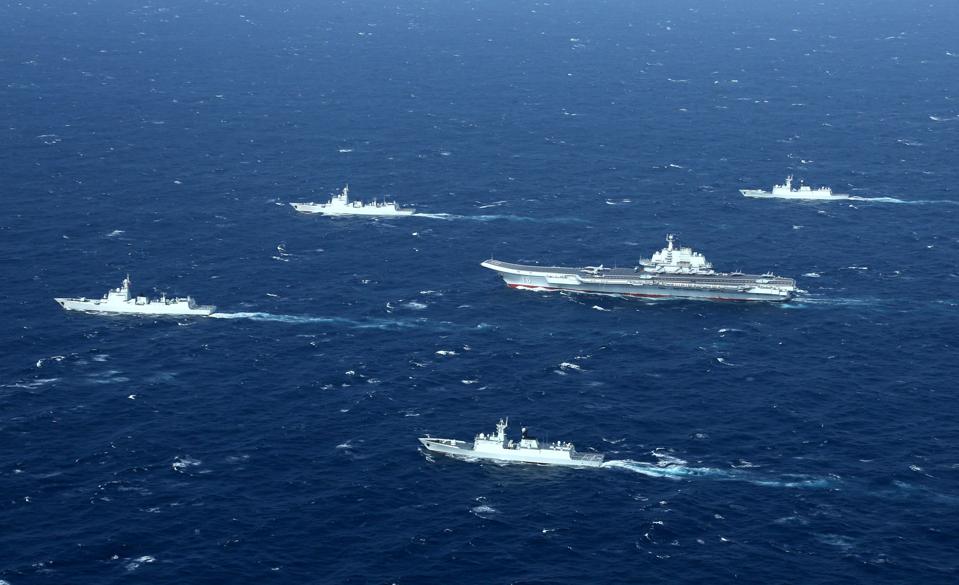 This aerial photo taken on January 2, 2017 shows a Chinese navy formation, including the aircraft carrier Liaoning (C), during military drills in the South China Sea. The aircraft carrier is one of the latest steps in the years-long build-up of China's military, as Beijing seeks greater global power to match its economic might and asserts itself more aggressively in Southeast Asia. STR/AFP/Getty Images
Overblown fears of war illustrate a weakness of democracy when opposing an autocracy that controls state media. While U.S. media is hyping the fear of war, in part because it increases viewers and ad revenues, Chinese media can deliver a sense of resolve and willingness to negotiate, which increases U.S. popular fear and presents China as the reasonable party. Fear of war in democracies leads citizens to prematurely pressure politicians into backing down in international disputes with powerful autocratic adversaries adept at brinkmanship. Citizens in autocracies have no such influence, and their views are nevertheless conditioned to be hawkish by state-controlled media. Democracies are thereby at a disadvantage to autocracies in negotiating and strategic messaging under conditions of brinkmanship.
Associating the Trump Team’s mooting of a blockade with war is therefore a self-defeating half-truth at best, and leaves China’s own culpability hidden. From a normative perspective, was it not an "act of war" when China constructed the islands in the Philippines' EEZ in the first place? Was  it not an "act of war" when China ignored the Permanent Court of Arbitration in the Hague and refused to vacate its military from those islands that are within the Philippines' EEZ?  Is the conclusion of the quoted experts then that China’s acts of war should be answered with silence and continued back-sliding, including in the case of the U.S. defense treaty with the Philippines?
The Philippines has been thunderously silent on Tillerson's comments, and Foreign Minister Perfecto Yasay could even be read to support the idea of a blockade, but without putting the Philippines' thin neck on the line. I don’t blame him.


"They [the Trump Team] said that they would prevent China from doing or undertaking these kind[s] of activity. If it wants to do that, they have the force to do so, let them do it," Yasay said, referring to Tillerson's remarks on Wednesday to U.S. senators.


Yet the Philippines' seeming support of the blockade, from a foreign minister who is usually pro-China, is not being widely reported. Rather, the focus of Western media is on fear of war and the reasonableness of China. The Wall Street Journal article ends with an ominous quote.


While it remained to be seen if the Trump administration would back up its words with action, Mr. Spicer’s remarks threatened to seriously upset U.S.-China relations, said Zhu Feng, an expert on the South China Sea at Nanjing University. “It’s a very, very significant concern,” Mr. Zhu said on Tuesday, calling for measured negotiation. “For the Trump administration to unexpectedly and suddenly slam its fist down on the table and say, 'No, no, you can’t go there,' I think it’s tactless,” he said. “China isn’t likely to back off, no matter how high the pressure is.”


China Daily couldn't have done a better job of presenting China's strategic messaging. The U.S. has for years warned against China's island building. There is nothing sudden about a new administration mooting the idea of increased military pressure on China. President Obama's good cop routine didn't work, and there is a new sheriff in town.
Measured negotiation without backbone is exactly what got us into the South China Sea imbroglio. We should have nipped China’s maritime aggression in the bud by opposing its 1995 occupation of Mischief Reef with a blockade, or better yet economic sanctions, at its inception. When faced with a sophisticated adversary that simultaneously uses incrementalism on the ground while seeking more negotiations, we need to hold the line. Negotiating with China from a position of weakness has killed us in Southeast Asia, and our allies are scattering into disorder.
If we are lucky, Trump will put much-needed spine into U.S. diplomacy in Southeast Asia. Many diplomats in the Philippines, Vietnam, Indonesia, Malaysia, and Brunei want this, but keep quiet publicly for fear of drawing China’s ire. U.S. strength gives us a unique ability to publicly negotiate for what is right. Remember it was Tillerson the diplomat, not “Mad Dog” Mattis the warrior, who so far made the toughest comments on the South China Sea. Don’t panic. Let Tillerson do his job, which is to negotiate from a position of strength.