Click to follow
The Independent Online
Mark 16 August, 3766 on your calendar.
According to a countdown clock put together by researchers at Tohoku University, that's the date Japan's population will dwindle to one.
For 25 years, the country has had falling fertility rates, coinciding with widespread aging. The worrisome trend has now reached a critical mass known as a “demographic time bomb.”
When that happens, a vicious cycle of low spending and low fertility can cause entire generations to shrink — or disappear completely.
The doomsday clock developed by Hiroshi Yoshida and Masahiro Ishigaki, economists at Tohoku University, relies on population and fertility data from 2014 and 2015. In April of 2014, there were 16.32 million children. By the following year, the total had fallen to 16.17 million, a drop of approximately 153,000.
Yoshida and Ishigaki's model estimates there are fewer than 16 million children alive in Japan today; the number only continues to fall. Within the next 1,750 years, the Japanese people could be no more.
A recent survey from the Japan Family Planning Association revealed that 49.3% of respondents between 18-49 years old said they hadn't had sex in the past month. Compared to results of a similar study just two years prior, that was nearly a 10% increase.
Both men and women tend to attribute their waning interest in physical intimacy to poor work-life balances — a phenomenon that's taking place in many industrialized countries, but most extremely in Japan. 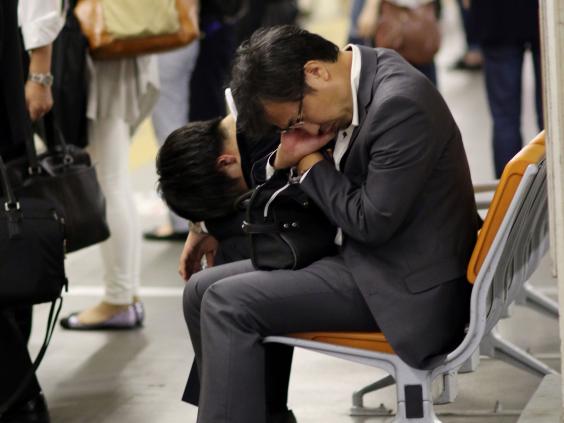 (Yoshikazu Tsuno/AFP/Getty)
Men sometimes work upward of 80 hours a week, often lacking the time or energy for sex, and women face a dilemma in pursuing their career or starting a family. Like many women in industrialized societies, Japanese women are delaying marriage or foregoing it altogether. In the choice between work or family, many have started simply choosing work.
If there's one silver lining, it's that Yoshida and Ishigaki have presented a rather generous timeline for Japan's population demise. Nearly two millennia should be enough time to reverse the trend and repopulate.
Read more:

• This chart is easy to interpret: It says we're screwed
• How Uber became the world's most valuable startup
• These 4 things could trigger the next crisis in Europe
Read the original article on Business Insider UK. © 2016. Follow Business Insider UK on Twitter.