Fact-checking the inaugural speech: the economy, crime and hiring American

Fact-checking the inaugural speech: the economy, crime and hiring American

In his first presidential speech, Donald Trump painted a bleak picture on issues ranging from education to the military. Alan Yuhas sorts fact from fiction

3,526
“For too long a small group in our nation’s capital has reaped the rewards of government … Washington flourished but the people did not share in its wealth.”
This is technically true – the Washington DC area has seen more than a decade of growth – but more complicated as a rhetorical attack on Washington as a symbol of “the establishment”.
The chasm of American inequality has a long history with origins spread around the country. Since 2000, the wealthiest 10% Americans have “reaped” the vast majority of the economy’s rewards. Many of those richest Americans are concentrated on the coasts, but most Americans, regardless of their geography or politics, only saw their income increase in 2015, after years of stagnation. That said, the middle class has been diminishing for years, according to a 2015 Pew study, as the population has shifted more into two other categories: upper income and lower.
The actual geography is uneven: some research shows that the most unequal states in 2010 were California and New York, and that states like North Dakota and Montana saw booms and busts alongside the gas industry.

Donald Trump inauguration: parade and protesters take to streets of DC – as it happened

Follow the ceremony and all the build up to the inauguration of Donald Trump as the 45th president of the United States of America
Read more
Trump has a more literal point, too – the average member of Congress is far wealthier than the average American – but the leaders of Washington DC are hardly uniform in their attitude toward inequality. For instance, Trump’s cabinet (if his nominees are all confirmed) is set to be the wealthiest in history and will include a former banker who profited immensely on foreclosing homes during the 2008 financial crisis, a billionaire called a “vulture” investor because of his history of picking apart businesses, and two other advisers, Steven Bannon and Gary Cohn, who are former Goldman Sachs executives.
“Politicians prospered but the jobs left and the factories closed.”
American manufacturing has been in decline for decades for a host of reasons. During the campaign, Trump liked to blame free trade deals such as Nafta, but outsourced jobs are only part of the equation. In 2015, the Congressional Research Service wrote: “Nafta did not cause the huge job losses feared by the critics or the large economic gains predicted by supporters.”
The deal’s net effect “appears to have been relatively modest”, the researchers concluded. Three years earlier, the OECD found that manufacturing jobs fled the US after the deal was signed but also noted the broader shift toward a service economy. Meanwhile, China has become the world’s largest manufacturer by dint of its beneficial trade status, its human and material resources, its lax and dangerous labor laws, and the steroidal advance of automation, which continues to destroy and create jobs in the US as well. Politicians played a part in all of this, but over multiple generations.
“An education system flushed with cash but which leaves our young and beautiful students deprived of all knowledge.”

Read more
The US education system, like its economy, is riven by gigantic inequities that vary by state. In 2015-16, public school teachers around the US earned, on average, between $42,025 and $77,957, according to the National Education Association, which would make them squarely in the middle class or on its edges, depending on where they live. Teachers are paid best in New York, Washington DC and Massachusetts, and paid least in South Dakota, Mississippi and Idaho.
School districts, on the other hand, differ greatly from each other, and experts have spent decades debating the best ways to shape education. Trump’s pick for education secretary, Betsy DeVos, has no experience in the public school system and instead has, in her home state of Michigan, campaigned to move students into private charter schools and into voucher programs. Charter schools have spread across Michigan, but the state’s academic performance has slid behind that of other states, and charter schools she has championed are now much derided.
“The crime and the gangs and the drugs.”
Trump is conjuring up a vision of America as a wasteland that does not square with reality. The nationwide crime rate remains low, about half what it was in 1991, despite a 4% increase in violent crime in 2015. That single-year increase was largely due to major increases in a few cities – namely Baltimore, Washington DC and Chicago – even as the US’s largest cities, including New York and Los Angeles, held crime to historic lows. Murders of black men and murders by firearms accounted for most of the increase.
During his campaign, Trump often falsely lumped “gangs” in with undocumented migrants; there is no evidence to suggest that immigrants are more likely to commit crimes than US-born citizens, and undocumented migration has not increased for about five years. Trump is correct that the US has a drug problem: a surgeon general’s report last year found that one in seven people in the US will probably develop a substance-abuse problem, and only one in 10 will receive treatment. Trump has talked about wanting to treat addiction as a health problem, but his pick for attorney general, Jeff Sessions, has a record of supporting criminalization in line with the “war on drugs”.
“For many decades, we’ve enriched foreign industry at the expense of American industry, subsidized the armies of other countries while allowing for the very sad depletion of our military. We defended other nations’ borders while refusing to defend our own.”
Trump is right that corporations, foreign and domestic, have profited enormously in the last decade. He is less correct about national security.
The US has budgeted $4.5bn for border security in 2017, an increase from 2016 and in line with Barack Obama’s general expansion of the Border Patrol and homeland security spending. 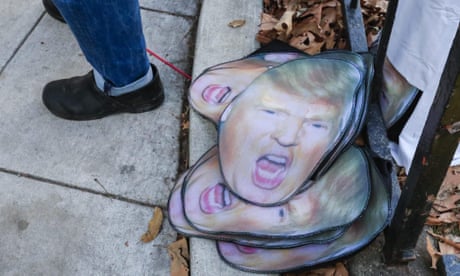 Protests erupt around the world as Trump sworn in – in pictures

View gallery
After the so-called sequestration cuts of 2013, a result of a fight between the White House and Congress over taxes, the Pentagon was forced to reduce its budget by 7.7%. The defense department’s leaders have rejected the idea that the military is “depleted”, however, and the Obama administration has worked to replace ageing equipment and develop new weapons.
“And spent trillions and trillions of dollars overseas while America’s infrastructure has fallen into disrepair and decay.”
A 2013 study estimated that the US wars in Iraq and Afghanistan have cost Americans between $4tn and $6tn. Foreign aid, on the other hand, costs on average about $31-$40bn a year, or about 1% of the total US federal budget of $3.5tn. The proposed 2017 budget for foreign aid is $50.1bn.
“We will follow two simple rules – buy American and hire American.”
Trump has yet to follow his own rule: his Mar-a-Lago club in south Florida has continued to hire foreign workers even after he won the White House.

…we have a small favour to ask. More people are reading the Guardian than ever but far fewer are paying for it. And advertising revenues across the media are falling fast. So you can see why we need to ask for your help. The Guardian's independent, investigative journalism takes a lot of time, money and hard work to produce. But we do it because we believe our perspective matters – because it might well be your perspective, too.
If everyone who reads our reporting, who likes it, helps to pay for it, our future would be much more secure.
Posted by --------------------------------------- at 6:07 PM