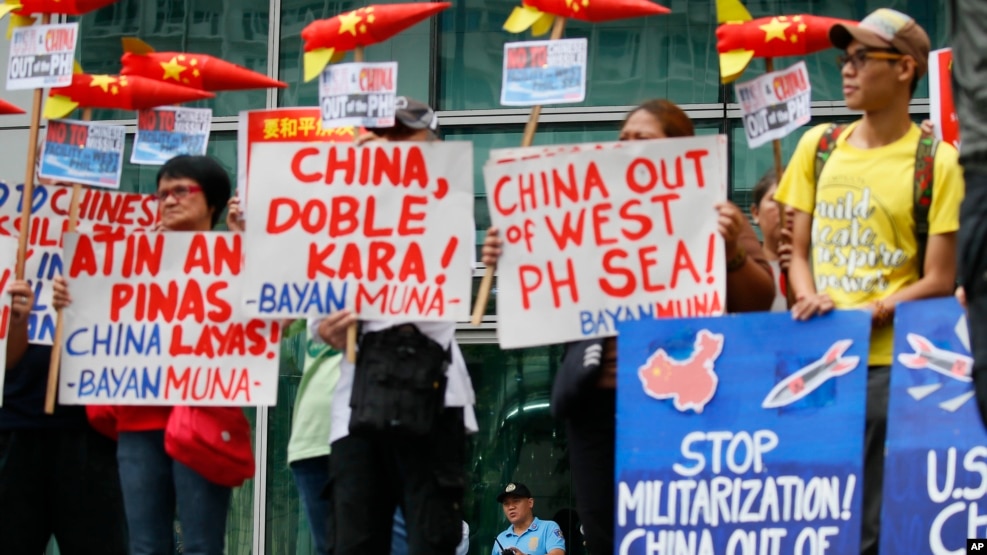 Police guard the entrance to the Chinese Consulate as environmental activists protest the alleged military build-up by China on the disputed group of islands at the South China Sea, Jan. 24, 2017 in the financial district of Makati east of Manila.
Share
Fledgling relations between maritime sovereignty rivals China and the Philippines face another test this year with new friction over Beijing's island reclamation in disputed waters and new U.S. President Donald Trump's expected challenge to Chinese clout in Asia.
The flap with China, plus a new overture from the United States, will challenge Philippine President Rodrigo Duterte to play one power off the other without isolating either or giving up maritime claims.
Duterte has set aside years of friction with Beijing over competing claims to the South China Sea after taking office in June. He met Chinese counterpart Xi Jinping in October. But two months later his government filed a mild protest, known as a note verbale, to Beijing over island-building in the contested Spratly Islands. Last week Duterte met China's vice foreign affairs minister Liu Zhenmin in Manila.
"It kind of underlines the fact the Spratly Islands are a serious national interest issue for the Philippines and that despite the element of friendly relations after the Duterte visit to Beijing, it doesn't seem as simple as just the issue has been traded off for better Chinese relations and China can anticipate getting everything it wanted after all," said Douglas Guilfoyle, associate international law professor at Monash University in Australia.
Philippine presidential spokesman Ernesto Abella said last week his country would keep asserting sovereignty over South China Sea islets while improving ties with China, according to local media reports.
When Duterte met Chinese President Xi Jinping in October, a watershed event between countries that had gotten along poorly under the previous Philippine president, the host pledged $24 billion in aid and investment and both agreed to shelve their maritime dispute for later discussion. 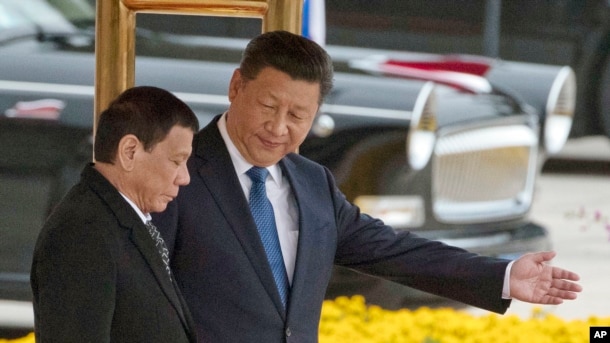 Chinese President Xi Jinping, right, and Philippine President Rodrigo Duterte are seen during a welcome ceremony outside the Great Hall of the People in Beijing, China, Oct. 20, 2016.
Protest lodged
Philippine Foreign Secretary Perfecto Yasay said this month a protest note had been sent to China's embassy in December over an apparent arms buildup on manmade islands in the South China Sea. China holds seven Spratly features compared to nine under Philippine control. Much of the chain lies in a Philippine exclusive economic zone.
China is expected to handle the protest cordially, analysts say. It was publicized only in January, suggesting that Manila had tried to keep it low key. China probably resented Duterte's proposal in November for a marine sanctuary inside the sea's contested Scarborough Shoal, but it kept quiet to save new relations, experts believe.
China will confer privately with Duterte's government as long as the maritime flaps exclude other countries or blocs of nations. Beijing has used private talks and pledges of aid or investment to build relations with other smaller countries in Asia.
"I suspect that from the perspective of the Chinese, this is something that requires consultation and not unilateral action," said Herman Kraft, political scientist at University of the Philippines Diliman. "The protest that was actually filed is probably something that might have caught the Chinese by surprise a bit. As long as it's not multi-lateralized, I think the Chinese are actually willing to accept it."
Smaller countries with grievances against China gain clout if united through bodies such as the 10-member Association of Southeast Asian Nations (ASEAN).
EXPLAINER: The South China Sea dispute

0:00:59
0:00:00 /0:00:59
▶
Direct link
Duterte's predecessor, Benigno Aquino, took China to a world arbitration court in The Hague. The court ruled in July against the legal basis for Beijing's claim to about 95% of the 3.5 million-square-kilometer South China Sea, including tracts inside Manila' exclusive economic zone. China rejected the verdict.
The sea is rich in fisheries and may have extensive reserves of undersea fossil fuel. Brunei, Malaysia, Taiwan and Vietnam also claim all or parts of it.
A ministerial-level Philippine delegation is in Beijing through Tuesday this week to meet Chinese Vice Premier Wang Yang for talks about investment deals and Duterte's role as head of ASEAN in 2017. In another Beijing-friendly move, ASEAN has not placed the South China Sea on its agenda this year.
Philippine-China relations will get stickier if the United States gets involved and the U.S. government has shown tentative signs of tapping Manila for a stronger military relationship under Trump.
The U.S. government is a long-standing counterweight to Chinese military power in Asia and recently an ally of smaller Asian countries faced with Beijing's maritime expansion. Washington seeks to protect marine shipping lanes and a network of pro-U.S. Asia Pacific allies. 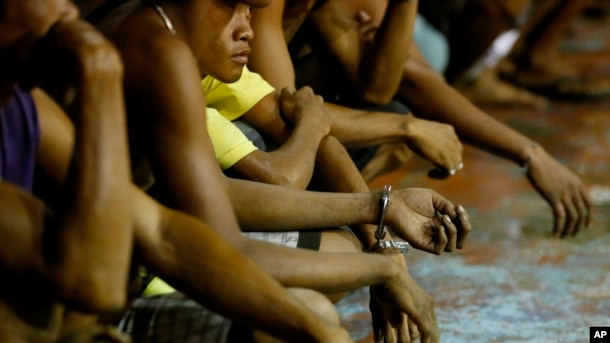 FILE - Rounded up residents, mostly males, wait to be transported to a police station in the continuing operation of President Rodrigo Duterte's so-called "War on Drugs" campaign, at the slum community of Tondo, in Manila, Philippines, Sept. 30, 2016.
Better U.S. relations under Trump?
Duterte has railed against the United States since taking office, saying the former Philippine colonizer and contractual defense ally demands too much from his country. Duterte vented particularly after Washington criticized his campaign the against drug trade that has included the suspected extrajudicial killings of 5,000 to 6,000 people.
But he and Trump talked by phone in December, an upbeat conversation with Trump lauding the Philippine anti-drug effort and earning praise from Duterte.
"Locally, Duterte has attempted to portray Trump as being very friendly and supportive of his administration, and to change his tune about the U.S. under Trump," said Jay Batongbacal, director of the Institute for Maritime Affairs and Law of the Sea at University of the Philippines.
The Philippines would find it hard to finesse a showdown between China and the United States over Chinese occupation in the sea, said Carl Baker, director of programs at the think tank Pacific Forum CSIS in Honolulu.
Trump's nominee for secretary of State, Rex Tillerson, advocated at his early January U.S. Senate confirmation hearing that China be stopped from occupying more disputed islets in the sea. China may have built military installations in the Spratlys as preparation for Trump's presidency, Carl Thayer, emeritus professor of politics at the University of New South Wales in Australia.
Duterte probably would not let Trump position troops in the Philippines to resist China, Thayer said.
"The longer term is quite different. The buildup of the U.S. military is going to take years. That's not going to happen immediately," Thayer said. "And it seems clear to me that Trump is really after market access and a resolution of the so-called currency manipulation issue with China."
Posted by --------------------------------------- at 7:59 PM