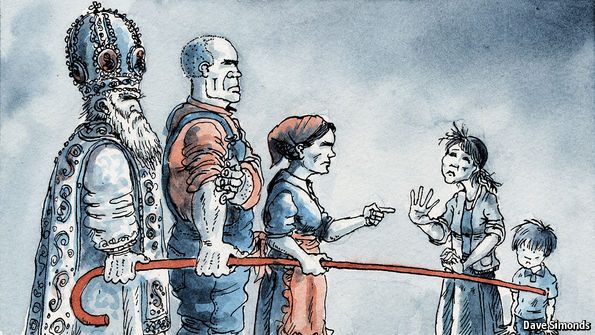 From the print edition | Europe

More
SHOULD it be a crime for a husband to hit his wife? In many countries this question no longer needs discussing. But not in Russia, where the Duma (parliament) voted this week to decriminalise domestic violence against family members unless it is a repeat offence or causes serious medical damage. The change is part of a state-sponsored turn to traditionalism during Vladimir Putin’s third presidential term. It has exposed deep fault lines. Many Russians now embrace the liberal notion of individual rights, but others are moving in the opposite direction.
Activists warn that decriminalisation will legitimise abuse. “The overall message to Russian citizens is that domestic violence isn’t a crime,” says Andrei Sinelnikov of the Anna Centre, a violence-prevention charity.
The debate began in 2016, when the government decriminalised battery, the least violent form of assault on the Russian statute books. Russia is one of three countries in Europe and Central Asia that do not have laws specifically targeting domestic violence. Instead it is treated like other forms of assault, ignoring the fact that spouses and children are more vulnerable than other victims. But when it decriminalised battery last June, the Duma decided to exempt domestic abuse, instead making it subject to the same two-year maximum sentence as racially motivated offences.
That pleased civil-society groups that had been pushing for tougher rules. But the Russian Orthodox Church was furious. Scripture and Russian tradition, the church said, regard “the reasonable and loving use of physical punishment as an essential part of the rights given to parents by God himself”. Meanwhile, conservative groups worried that parents might face jail. They argued that it was wrong for parents to face harsher punishment for hitting their child than a neighbour would.
Under pressure from such groups, deputies have put forward a bill that makes the first instance of poboi—battery that does not do lasting harm—an administrative violation carrying a fine of 30,000 roubles ($502), community service or a 15-day detention. It also returns the crime to the realm of “private prosecution”, where the victim is responsible for collecting evidence and bringing a case. Repeat offences would be criminal infractions, but only within a year of the first, giving abusers a pass to beat relatives once a year. Vyacheslav Volodin, the speaker of the Duma, says the bill would help build “strong families”. The bill’s second reading on January 25th won 385 out of 387 votes. It is expected to sail through its third reading and be signed into law by Mr Putin.

He hit me, it didn’t feel like a kiss
Anna Zhavnerovich does not agree that tolerating domestic abuse leads to strong families. A lifestyle journalist in Moscow, Ms Zhavnerovich had lived with her boyfriend for several years and discussed marriage. One night in December 2014 the conversation turned towards the possibility of breaking up. Her boyfriend proceeded to beat her black and blue. She managed to get him convicted after lawyers who read the account she published online came to her aid. “People think it can’t happen to them,” says Ms Zhavnerovich. “They hold on to an illusion of safety.”
Domestic violence has deep cultural roots. An old Russian proverb says: “If he beats you it means he loves you.” “Violence isn’t just a norm, it’s our style of life,” says Alena Popova, an advocate for laws against domestic violence. The scale of the problem is difficult to measure, but according to Russia’s interior ministry, 40% of violent crimes happen within the family. More than 70% of women who call the Anna Centre’s hotline never report their cases to the police. The practice of private prosecution, which forces victims to navigate bureaucratic obstacles, dissuades many. “It’s the circles of hell, it goes on and on,” says Natalia Tunikova, who tried unsuccessfully to prosecute the man she says abused her.
Nonetheless, awareness has been growing, partly thanks to grassroots efforts. “The idea that ‘it’s her fault’ is no longer accepted a priori,” says Ms Zhavnerovich. (Curiously, she supports the new law, believing that more women will come forward if they do not think their partners will be sent to Russia’s harsh prisons.) A social-media flashmob under the hashtag “IAmNotAfraidToSpeak” took off in Ukraine and Russia last year, with thousands sharing tales of abuse.
Russia’s ultra-conservatives are not afraid to speak, either. Elena Mizulina, a senator known for promoting laws against “gay propaganda”, has pushed the latest changes, saying that “women are not offended when we see a man beating his wife.” But decriminalisation fans also argue that family affairs are not the state’s business. “The family is a delicate environment where people should sort things out themselves,” says Maria Mamikonyan, head of the All-Russian Parents Resistance movement, which collected thousands of signatures supporting the measure.
In a country scarred by communism—where the state was once all-intrusive and families had virtually no privacy—such sensitivities are understandable. Some of the opposition to domestic-violence laws stems from a rational fear of allowing Russia’s corrupt police and judiciary more power over family life. When critics charge that conservatives’ views hark back to the Domostroi, a set of household rules popular during the reign of Ivan the Terrible, Ms Mamikonyan objects. What they advocate is not a restoration of “the Middle Ages”, she says, but merely a return to the values “that European civilisation held in the 19th and 20th centuries”. To many Russian women, that still sounds like a giant step backwards.