China's debt is 250% of GDP and 'could be fatal', says government expert

China's debt is 250% of GDP and 'could be fatal', says government expert

This article is 11 months old

4,377
Agence France-Presse
China’s total debt was more than double its gross domestic product in 2015, a government economist has said, warning that debt linkages between the state and industry could be “fatal” for the world’s second largest economy.
The country’s debt has ballooned to almost 250% of GDP thanks to Beijing’s repeated use of cheap credit to stimulate slowing growth, unleashing a massive, debt-fuelled spending binge.
While the stimulus may help the country post better growth numbers in the near term, analysts say the rebound might be short-lived.

The bad smell hovering over the global economy

Read more
China’s borrowings hit 168.48 trillion yuan ($25.6 trillion) at the end of last year, equivalent to 249% of economic output, Li Yang, a senior researcher with the leading government think-tank the China Academy of Social Sciences (CASS), has told reporters.
But the huge number, which includes government, corporate and household borrowings, was lower than some non-government estimates.
The consulting firm McKinsey Group said earlier this year that the country’s total debt had quadrupled since 2007 and was likely as high as $28 trillion by mid-2014.
The debt-to-GDP ratio is not the highest in the world. The US has a ratio of 331%, for example, much of which is accounted for by federal debt.
But part of the concern about China’s massive debt binge is that the most worrying risks lie in the non-financial corporate sector, where the debt-to-GDP ratio was estimated at 156%. This sector includes the liabilities of local government financing vehicles, Li said.
Many of the companies in question are state-owned firms that borrowed heavily from government-backed banks and so problems with the sector could ultimately trigger “systemic risks” in the economy, he said.
“The gravity of China’s non-financial corporate debt is that if problems occur with it, China’s financial system will have problems immediately,” Li said.
He added that the problem would also affect state coffers because Chinese banks are “closely linked to the government”. 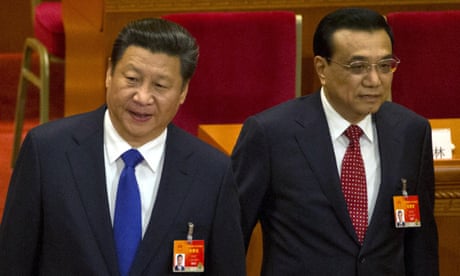 Read more
“It’s a fatal issue in China. Because of such a link, it is probably more urgent for China than other countries to resolve the debt problem,” he said.
Speaking earlier this week, David Lipton, first deputy managing director with the International Monetary Fund, also singled out China’s corporate borrowing as a major concern, warning addressing the issue is “imperative to avoid serious problems down the road”.
Despite the concerns, China is having difficulty kicking its credit addiction. On Wednesday, the People’s Bank of China announced that new loans extended by banks jumped to 985.5 billion yuan last month, up from 555.6 billion yuan in April.
The country’s economy grew 6.9% last year, the slowest rate in a quarter of a century, and weakening economic figures have signalled the slowdown has continued this year.