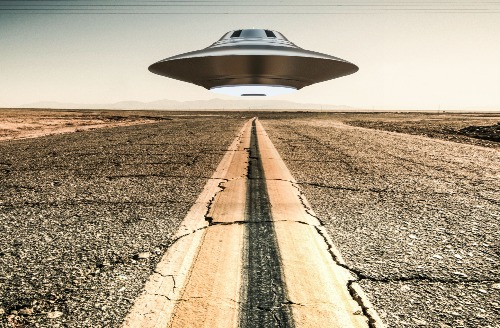 According to secureteam10, a YouTube channel, an alien disc was caught disappearing from view when caught on the International Space Station’s live feed. Although NASA has cut the feed mysteriously in the past when unidentified objects are caught on their video, it doesn’t immedatly appear that they took precautions with this one.
The spectacular feed from the ISS gives people on Earth a chance to see the incredible views that astronauts admire while in space. It also affords us the opportunity to see UFOs, unidentified flying objects in outer space too, and make judgments based on what we are seeing with our own eyes.
The International Space Station (ISS) is circling some 240 miles above the surface of Earth and filming our planet and the surrounding area from outer space. It takes the space station about 90 minutes to orbit the planet, with a total of around 15 trips done every 24 hours. The station passes into night time for 45 minutes every orbit, and at that time, the live feed falls dark, but it isn’t uneventful. NASA says you can still see lightning or city lights on the live feed. Astronauts from the across the world stay on the joint international scientific research station where they participate in research on life in space. The ISS is the largest man-made satellite currently orbiting the Earth and provides a glimpse into the wonders of outer space via a live feed which is streamed over the internet. Anyone can view the live feed too – unless of course, NASA kills it because an alien spacecraft can be seen speeding by.
Earlier this year, in March, NASA was forced to issue a response to a video which claimed to show six alien spacecraft behind an astronaut in a video taken on the ISS. NASA claims that “no unidentified objects in the popular sense have been seen from the International Space Station. Reflections from station windows, the spacecraft structure itself or lights from Earth commonly appear as artifacts in photos and videos from the orbiting laboratory.”
But what about this newest video?
Secureteam10, a YouTube channel walks us through what they claim we are looking at. The narrator of this video says that a disc is the most common reported UFO sighting. He also claims that the UFO moves suddenly once the camera captures it as if it knows that it’s being caught on the live feed. This is also in no way a reflection in an ISS window.
Although the video is long, it also details what is supposedly evidence of the existence of UFOs. It is definitely something that NASA has a vested interest in covering up, according to conspiracy theorists, and based on previous statements by the agency.  Unfortunately, most UFO videos from space end up being debunked as “ice chunks” or other space debris floating by the ISS. Could this video simply be a large chunk of ice disappearing into space? Or is it something more? Watch and draw your own conclusions, since we likely won’t get the truth from the government.