Posted by: Jack Murphy  |@NeonNettle
on 29th July 2015 @ 10.05am
The Inuit elders otherwise known as the indigenous people of the arctic regions of Canada, have issued NASA and the world a warning that the earth has 'tilted' or 'wobbled' The indigenous people are now maintaining that the sun no longer rises were it used to and that the days warm up quicker.
Indianlife.org reports
The earth has shifted, tilted or as they put it, "wobbled" to the north and they all agree "Their sky has changed!"
The elders maintain the Sun doesn't rise where it used to, they have longer daylight to hunt and the Sun is higher than it used to be and warms up quicker than before. The elders who were interviewed across the north all said the same thing, their sky has changed.
(SCROLL DOWN FOR VIDEO)

The stars the Sun and the Moon have all changed affecting the temperature, even affecting the way the wind blows, it is becoming increasingly hard to predict the weather, something that is a must on the Arctic.
The elders all agree, they believe the Earth has shifted, wobbled or tilted to the North.
In an article in The Big Wobble Almanac, and in a video, we see some of the extreme weather events being attributed to this "wobble."

In the article it states that NASA scientists and experts are "worried" by the information the Inuit Elders are providing for them. 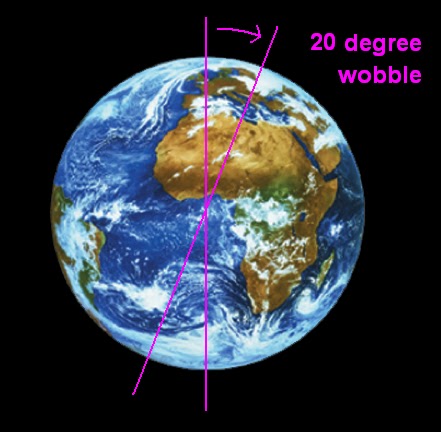 The Inuits are indigenous people that inhabit the arctic regions of Canada, the United States and Greenland and throughout history their very lives have been dependent on being able to correctly forecast weather.... and they are warning NASA and the world that global warming isn't the cause of what we are seeing with extreme weather, earthquakes and other events.