Update: The following video depicts the aftermath of the shelling, which has reportedly claimed the lives of at least two civilians.
(as RT reports, "a video released by the Syrian Kurdish news agency ANHA and obtained by Ruptly shows damaged buildings and people rushing to take care of the wounded in the village of Maryamayn near the town of Afrin")
Update: Reports indicate the Turkish army has crossed the border into Syria.
February 15, 2016 "Information Clearing House" - "Zero Hedge " - "The Syrian government says Turkish forces were believed to be among 100 gunmen it said entered Syria on Saturday accompanied by 12 pick-up trucks mounted with heavy machine guns, in an ongoing supply operation to insurgents fighting Damascus," Reuters reports. "The operation of supplying ammunition and weapons is continuing via the Bab al-Salama crossing to the Syrian area of Azaz," the Assad government says.
Meanwhile, since all that would take to unleash a full-blown war is for some Russian to be unexpectedly blown up, events like this do not inspire much confidence in the Syrian "ceasefire":
On Saturday, the geopolitical world was shocked when Turkey began shelling Aleppo, where the Syrian opposition has its back against the wall in the face of an aggressive advance by Hezbollah and the IRGC supported, of course, by Russian airstrikes.

To be sure, everyone knew Ankara and Riyadh would have to do something quick if they wanted to preserve the rebellion. Their proxies are being rolled up rapidly by Hassan Nasrallah’s army and Vladimir Putin’s air force juggernaut. But few expected the escalation would come so quickly.
But Recep Tayyip Erdogan is unpredictable (just ask the lone surviving pilot of the Su-24 Turkey shot down in November) and this weekend, he decided that there’s no time like the present when it comes to starting World War III.
Officially, Turkey says it’s shelling Kurdish positions in Syria in self defense. It’s all about securing the border against hostiles, Ankara says. Of course the idea that the YPG are set to invade Turkey is laughable. The Syrian Kurds have secured enough space in their own country to declare an autonomous proto-state, and they needn’t aspire to capturing Turkish territory.
“They are abusing U.S. support to capture land from the opposition,”a Turkish official said, reflecting Ankara's anger at the fact that Russia and Hezbollah's offensive is making it easier for the Kurds to consolidate their gains. “The U.S. should tell them to stop rather than telling Turkey to stop.”
But for Erdogan, that’s precisely the problem. Ankara fears the YPG’s gains will embolden the PKK militarily and the HDP politically and last June’s elections clearly suggest that an emboldened Kurdish minority has the power to shake up the political scene.
And so, Turkey is set to take the fight to Syria in the name of fighting “terrorists”, which for Erdogan, means eradicating the Kurds. As we noted on Saturday, the challenge for Ankara and Riyadh is this: somehow, Turkey and Saudi Arabia need to figure out how to spin an attack on the YPG and an effort to rescue the opposition at Aleppo as an anti-ISIS operation even though ISIS doesn’t have a large presence in the area.
Incredibly, Turkey seems less concerned about the optics than we thought. In short, Erdogan looks as though he’s prepared to simply enter the war on the pretext that Turkey needs to roll back the YPG which, you’re reminded is explicitly backed by the US.
In a way that makes sense. You can’t very well shell Aleppo and use ISIS as an excuse. The group’s presence isn’t large enough in the area. But what you can do is say “the PKK are terrorists, they’re allied with the YPG who are in Aleppo, and therefore, we need to shell Aleppo.”
Put in the simplest possible terms, what Erdogan is really doing is trying to reopen supply lines closed by Russia and Iran by wiping out Kurdish forces who dominate the northern border with Turkey.
The shelling continued on Sunday. "The Turkish army shelled positions held by Kurdish-backed militia in northern Syria for a second day on Sunday, killing two fighters," Reuters reports, citing the admittedly dubious Syrian Observatory for Human Rights. The YPG controls nearly all of Syria's northern frontier with Turkey, and has been a close ally of the United States in the campaign against Islamic State in Syria, but Ankara views the group as an extension of the Kurdistan Workers Party (PKK), which has waged a three-decade-old insurgency for autonomy in southeast Turkey."
Jaysh al-Thuwwar, an allied group warned Turkey against further attacks, saying if the country "has goals in our dear nation, we will defend our land and our people, and view it as a hostile party". Again, this comes from the very same groups the US is overtly supporting with arms and air power. So not the CIA-sponsored opposition. Turkey is shelling fighters who literally have the clearance to call in US airstrikes from warplanes that, in an irony of ironies, are flying from Incirlik, the Turkish air base.
And speaking of Incirlik, the Saudis are moving into position. 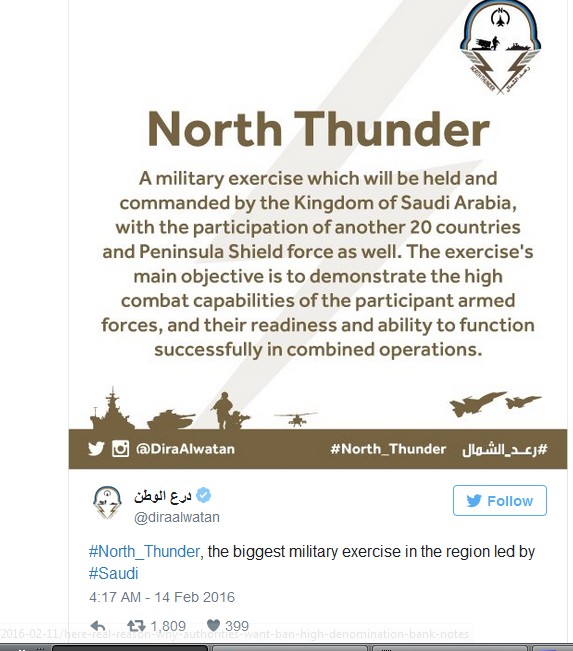 
Witnessing the Kingdom of Saudi Arabia during the next few hours the arrival of troops participating in the military exercise largest and most important in the history of the region, "Raad north," In the King Khalid Military City Hafr al-Batin in the northern kingdom will be implemented exercise which is the largest military maneuver in terms of the number of countries, with the participation of 20 Arab, Islamic and friendly country, in addition to the Peninsula shield forces, and these countries are: Saudi Arabia, United Arab Emirates, Jordan, Bahrain, Senegal, Sudan, Kuwait, Maldives, Morocco , Pakistan, Chad, Tunisia, the moon, Djibouti, Oman, Qatar, Malaysia, Egypt, Mauritania, Mauritius, in addition to the Peninsula shield forces. Islands constitute Raad north, the largest military exercise of its kind in terms of the number of participating countries, and military equipment quality of weapons and military equipment diverse and sophisticated, including fighter jets from different models reflect the large quantitative and qualitative spectrum, which show him those forces, as well as the participation of a wide range of artillery and tanks, infantry and air defense systems, naval forces, in a simulation of the highest level of high alert for the armies of the countries 20 participation.
Exercise Raad North represents a clear message to the Saudi brothers and brothers and friends of the participating countries stand united to face all challenges and to maintain peace and stability in the region, in addition to the emphasis on many of the goals, all in full readiness circle and maintain the peace and security of the region and the world .
Analysts say that the exercise Raad North confirms that the leaders of the participating countries, are fully in line with the vision of the Kingdom of Saudi Arabia in the need to protect the peace and stability in the region.


A lot of words to say this: "We're flexing our muscles on the way to invading Syria." 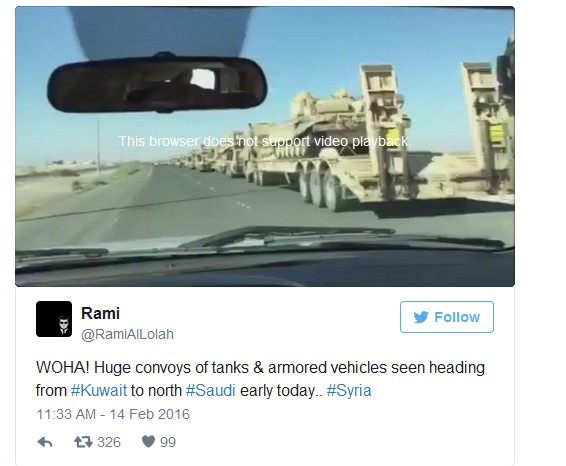 "What is present now is aircraft that are part of the Saudi forces," Brigadier General Ahmed al-Asiri told Al Arabiya News Channel on Sunday, referencing the Saudi presence at Incirlik. "The kingdom is ready to participate in any ground operations that the coalition (against ISIS) may agree to carry out in Syria," he added.
Remember, Turkey also shelled the Syrian army on Saturday.
“Turkish artillery shelled Syrian territory, targeting Syrian Kurdish positions and the positions of the Syrian Arab Army,” SANA news agency reported, citing a letter from Damascus to the UN. Expect those attacks to continue in the name of "self defense."
Meanwhile, the Russians aren't letting up. Aleppo will be recaptured and that, as they say, is that.

"Russia is determined to create facts on the ground, and when they have accomplished this, then they will invite the West to fight a common enemy, this is ISIS," Norbert Roettgen, head of the foreign affairs committee in the German parliament says, underscoring our contention that Russia is determined to negotiate from a position of absolute strength. "Let's be clear about what this agreement does. It allows Russia's assault on Aleppo to continue for another week," John McCain exclaimed. "Mr Putin is not interested in being our partner. He wants to shore up the Assad regime, he wants to establish Russia as a major power in the Middle East, he wants to use Syria as a live fire exercise for Russia’s modernizing military."
Right. And America is seemingly powerless to stop him.
In the short term, the only question now is this: how long will it be before Turkey or Saudi Arabia kills a Hezbollah fighter or an IRGC general?
Or worse: what happens when a Russian ends up dead at the hands of the region's Sunni powers?