From the abstract of a 2012 paper by Reed Wood, Jason Kathman, and Stephen Gent:

As a conflict actor weakens relative to its adversary, it employs increasingly violent tactics toward the civilian population as a means of reshaping the strategic landscape to its benefit. The reason for this is twofold. First, declining capabilities increase resource needs at the moment that extractive capacity is in decline. Second, declining capabilities inhibit control and policing, making less violent means of defection deterrence more difficult. As both resource extraction difficulties and internal threats increase, actors’ incentives for violence against the population increase. To the extent that biased military interventions shift the balance of power between conflict actors, we argue that they alter actor incentives to victimize civilians. Specifically, intervention should reduce the level of violence employed by the supported faction and increase the level employed by the opposed faction. We test these arguments using data on civilian casualties and armed intervention in intrastate conflicts from 1989 to 2005. Our results support our expectations, suggesting that interventions shift the power balance and affect the levels of violence employed by combatants.

In fact, they find that military interventions in favor of the rebel faction (as opposed to pro-government or neutral interventions) tend to increase government killings of civilians by about 40% (see Figure 2 below from p. 656). 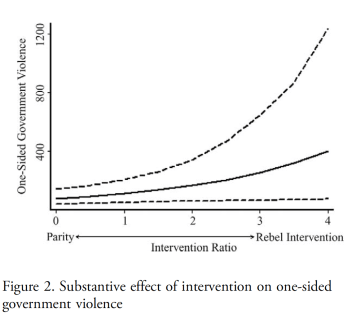 Supporting a faction’s quest to vanquish its adversary may have the unintended consequence of inciting the adversary to more intense violence against the population. Thus, third parties with interests in stability should bear in mind the potential for the costly consequences of countering murderous groups. Potential interveners should heed these conclusions when designing intervention strategies and tailor their interventions to include components specifically designed to protect civilians from reprisals. Such strategies could include stationing forces within vulnerable population centers, temporarily relocating susceptible populations to safe havens that are more distant from the conflict zone, and supplying sufficient ground forces to be consistent with such policies. These actions could fulfill broader interests in societal stability in addition to interests in countering an organization on geopolitical grounds. Successful policies will thus not only counter murderous factions but will explicitly seek to protect civilian populations.

The full paper is here (gated).