How Fast Can China Grow? Not as Fast as Most Analysts Think

How Fast Can China Grow? Not as Fast as Most Analysts Think

Via Email, Michael Pettis at China Financial Markets quantifies various growth and investment scenarios. Pettis maintains 6% or higher growth is not plausible and that even 3-4% growth may be optimistic. What follows is from Pettis ...

Consumption and Investment Growth Under Rebalancing

Under specified rebalancing assumptions for China it is possible to calculate arithmetically the annual growth rate for consumption and investment under different GDP growth scenarios. This allows us to decide whether these scenarios are plausible or not.

Table: GDP, consumption, and investment growth in a rebalancing China 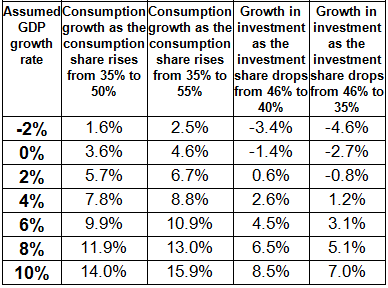 This allows me to make statements like this: If you think that China’s GDP will grow by 7% a year over the next decade, and if you expect a minimal amount of rebalancing, then you are implicitly predicting that consumption will grow by 10-11% a year for ten years and that investment will grow by 4-5.5%. If you believe these two implicit predictions are plausible, then your 7% prediction is also plausible.

I want to state again that these numbers are not predictions. They are simply the arithmetically necessary growth rates that are consistent with our assumptions. To return to the interpretation of the table, let us assume again that China does the minimal amount of rebalancing so that in ten years household consumption is 50% of GDP and investment is 40% of GDP, what are the investment and consumption growth rates consistent with, say, 6% GDP growth, and are they plausible?

It turns out that average GDP growth rates of 6% require, as an arithmetical necessity, that household consumption grow by 9.9% a year over the next ten years and that investment grow by 4.5%, after many years of high double digit growth and more recently growth in the low double digits. Is this plausible?

I would argue that positive investment growth rates for another ten years are highly likely to result in our reaching debt capacity constraints well before the end of the decade, so I am skeptical about the investment implications of this scenario. By the way some analysts have mischievously pointed to the very poor construction quality in China to argue that investment growth rates have to stay high just in order to account for higher-than-estimated depreciation costs, and that this suggests that China can grow faster than what we might otherwise assume.

This of course is nonsense. The fact that buildings and infrastructure are poorly constructed means that China is worse off, not better off, and the investment projects will ultimately be required to generate sufficient returns to pay off even more debt than originally estimated. Because it is debt capacity constraints that constrain investment, anything that creates debt without creating additional productivity to service the debt cannot possibly be a solution. Higher-than-expected depreciation increases debt relative to debt-servicing capacity.

I would also argue, more importantly, that if annual investment growth drops to 4.5%, and GDP growth to 6%, it will be very difficult, without significant and politically painful transfers from the state sector to the household sector, for consumption to grow at anywhere close to 9.9% a year for ten years. Consumption growth is, after all, positively correlated with investment growth, especially in the internal provinces upon which a lot of useless investment has been lavished.

In order to get Chinese households to increase their consumption by nearly 10% every year, I would argue that household income would have to grow at that rate, which means that wages, interest rates, and the value of the renminbi should in the aggregate increase rapidly to get consumption to rise fast enough, and of course since it is precisely low wage growth, low interest rates, and an undervalued currency that goose GDP growth, reversing them is not consistent with high GDP growth.

All of this suggest to me that while 6% GDP growth for the next ten years might not be impossible, it is extremely unlikely because it requires what are to me implausible assumptions about the ability to maintain and increase already-high levels of investment without increasing the debt burden unsustainably and about the rise in the growth rate of household income as both GDP and investment growth drop sharply. This is why even 6% annual GDP growth rates, which are still lower than most current growth projections for China, are implausibly high, in my opinion.

What about if you believe that reducing investment is a much more urgent priority than raising consumption? In that case you might argue that China can grow at 6% while the household consumption share of GDP rises to 50% and the investment share of GDP declines to 35%.

In that case you are implicitly assuming that household consumption will grow on average by 9.9% a year for ten years while investment grows by 3.1% a year. Is this possible? Of course it is. Is it plausible? Again, only if you believe that investment growth can drop sharply while the growth in household consumption rises to nearly 10% a year for ten years.

So what is plausible? My working assumption, which I acknowledge is probably still optimistic, is that somehow or the other Beijing can keep household consumption growing at around 7-8% a year, even with a sharp decline in the investment growth rate and with the pressing need to clean up the banking system (and remember that traditionally, in China and elsewhere, cleaning up the banking system always means finding ways of getting the household sector to pay for the losses).

I know many consider assumption this to be a little optimistic, but if Beijing is worried about the social implications of adjustment, this is probably the target it will need to meet, and Beijing can do so even with much slower GDP growth if the leadership implements mechanisms that transfer wealth from the state sector to the household sector. I discuss why this is the right growth rate for to target in more detail in a recent piece published on the Carnegie Endowment website and in an OpEd piece in the Financial Times.

The table above shows that if China is to do the minimal amount of rebalancing, which requires that the world accommodate for another ten years large Chinese trade surpluses, and that debt can continue to grow – quickly but at a lower rate than in the past – for another ten years without pushing China up against its debt capacity constraints, 7-8% growth in household consumption is consistent with roughly 3-4% growth in GDP. It is also consistent with more or less no growth in investment, which would after ten years bring the investment level down to 35% of GDP.

These numbers are, I think, plausible if still a little optimistic. This is something, in other words, that I think Beijing can reasonably pull off – if it is able to manage political opposition from the domestic elite – because they can transfer resources from the state sector to the household sector at a pace necessary to keep the growth rate of household income and household consumption fairly high. However GDP growth rates significantly above 3-4%, I would argue, require assumptions that are unlikely to be met unless Beijing is able radically to transform its attitude to state ownership and the power of the elite, and so embark on a major transfer of assets from the state to the household sector.

This is why I have argued since 2009 that that 3-4% average GDP growth for a decade is likely to be the upper limit once Beijing seriously begins to rebalance the Chinese economy, and if the administration of President Xi and Premier Li is able to pull this off, it would be a huge accomplishment. China would rebalance substantially, the problem of debt would have been managed relatively well, and the income of average Chinese households will have nearly doubled over the decade. The key assumption, of course, is that in the face of a sharp drop in investment, Beijing is nonetheless able to maintain current high levels of consumption growth.

Michael Pettis stresses his table is not a series of predictions, but rather a mathematical model of what is probable or not. I agree with his model. If correct, a slow-growth China is baked in the cake, and that is going to catch nearly every economist off guard. Every country will be impacted, but especially the commodity exporters like Australia and Canada.