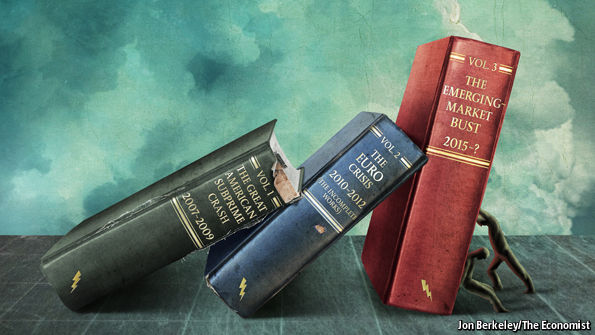 IT IS close to ten years since America’s housing bubble burst. It is six since Greece’s insolvency sparked the euro crisis. Linking these episodes was a rapid build-up of debt, followed by a bust. A third instalment in the chronicles of debt is now unfolding. This time the setting is emerging markets. Investors have already dumped assets in the developing world, but the full agony of the slowdown still lies ahead.
Debt crises in poorer countries are nothing new. In some ways this one will be less dramatic than the defaults and broken currency pegs that marked crashes in the 1980s and 1990s. Today’s emerging markets, by and large, have more flexible exchange rates, bigger reserves and a smaller share of their debts in foreign currency. Nonetheless, the bust will hit growth harder than people now expect, weakening the world economy even as the Federal Reserve begins to raise interest rates.

In this section
Reprints
Chronicle of a debt foretold
In all three volumes of this debt trilogy, the cycle began with capital flooding across borders, driving down interest rates and spurring credit growth. In America a glut of global savings, much of it from Asia, washed into subprime housing, with disastrous results. In the euro area, thrifty Germans helped to fund booms in Irish housing and Greek public spending.
As these rich-world bubbles turned to bust, sending interest rates to historic lows, the flow of capital changed direction. Money flowed from rich countries to poorer ones. That was at least the right way around. But this was yet another binge: too much borrowed too fast, and lots of the debt taken on by firms to finance imprudent projects or purchase overpriced assets. Overall, debt in emerging markets has risen from 150% of GDP in 2009 to 195%. Corporate debt has surged from less than 50% of GDP in 2008 to almost 75%. China’s debt-to-GDP ratio has risen by nearly 50 percentage points in the past four years.
Now this boom, too, is coming to an end. Slower Chinese growth and weak commodity prices have darkened prospects even as a stronger dollar and the approach of higher American interest rates dam the flood of cheap capital. Next comes the reckoning. Some debt cycles end in crisis and recession—witness both the subprime debacle and the euro zone’s agonies. Others result merely in slower growth, as borrowers stop spending and lenders scuttle for cover. The scale of the emerging-market credit boom ensures that its aftermath will hurt. In countries where private-sector indebtedness has risen by more than 20% of GDP, the pace of GDP growth slows by an average of almost three percentage points in the three years after the peak of borrowing (see article). But just how much pain lies ahead will also depend on local factors, from the scale of the exchange-rate adjustment that has already taken place to the size of countries’ reserves. Crudely, most emerging economies can be put into one of three groups.
The first group includes those for which the credit boom will be followed by a prolonged hangover, not a heart attack. The likes of South Korea and Singapore belong in this category; so, crucially for the world economy, does China. It still has formidable defences to protect it against an exodus of capital. It has an enormous current-account surplus. Its foreign-exchange reserves stood at $3.5 trillion in October, roughly three times as much as its external debt. Policymakers have the ability to bail out borrowers, and show little sign of being willing to tolerate defaults. Shovelling problems under the carpet does not get rid of them. Firms that ought to go bust stagger on; dud loans pile up on banks’ balance-sheets; excess capacity in sectors like steel leads to dumping elsewhere. All this saps growth, but it also puts off the threat of a severe crisis.
For that risk, look instead to countries in the second category—those that lack the same means to bail out imprudent borrowers or to protect themselves from capital flight. Of the larger economies in this category, three stand out. Brazil’s corporate-bond market has grown 12-fold since 2007. Its current-account deficit means that it relies on foreign capital; its political paralysis and fiscal inflexibility offer nothing to reassure investors. Malaysia’s banks have lots of foreign liabilities, and its households have the highest debt-to-income ratio of any big emerging market; its cushion of foreign-exchange reserves looks thin and its current-account surplus is forecast to shrink. Turkey combines a current-account deficit, high inflation and foreign-currency-denominated debts that have become more onerous as the lira has fallen.
The third group of countries consists of those emerging markets that will either escape serious trouble or have already gone through the worst. Of the big ones, India is in healthier shape than any other big emerging economy and Russia might just surpass expectations. The rouble has already gone through a bigger adjustment than any other major currency, and the economy shows tentative signs of responding. Argentina, a perennial flop but one with little private debt, could also shine if a reformist wins the presidency this month.
Such brighter spots aside, everything else points to another pallid year for the world economy. The IMF has forecast higher growth in emerging markets next year; the lesson of past debt cycles suggests another year of slowdown is more likely. And weakness in the developing world, which accounts for over half of the global economy (in purchasing-power-parity terms), matters far more than it once did. Lower growth in emerging markets hits the profits of multinationals and the cash flows of exporters. Low commodity prices help oil importers but ratchet up the pressure on indebted miners, drillers and traders, which between them owe around $3 trillion.

Volume four?
Europe’s open economy is most exposed to a cooling in emerging-market demand, which is why more monetary easing there looks likely. But America’s policy dilemma is more acute. The divergence in monetary policy between it and the rest of the world will put upward pressure on the dollar, hurting exports and earnings. And waves of capital may again seek out the American consumer as the borrower of choice. If so, the world’s debt crisis may end up right back where it started.