Ralph Jennings , Contributor
Opinions expressed by Forbes Contributors are their own. 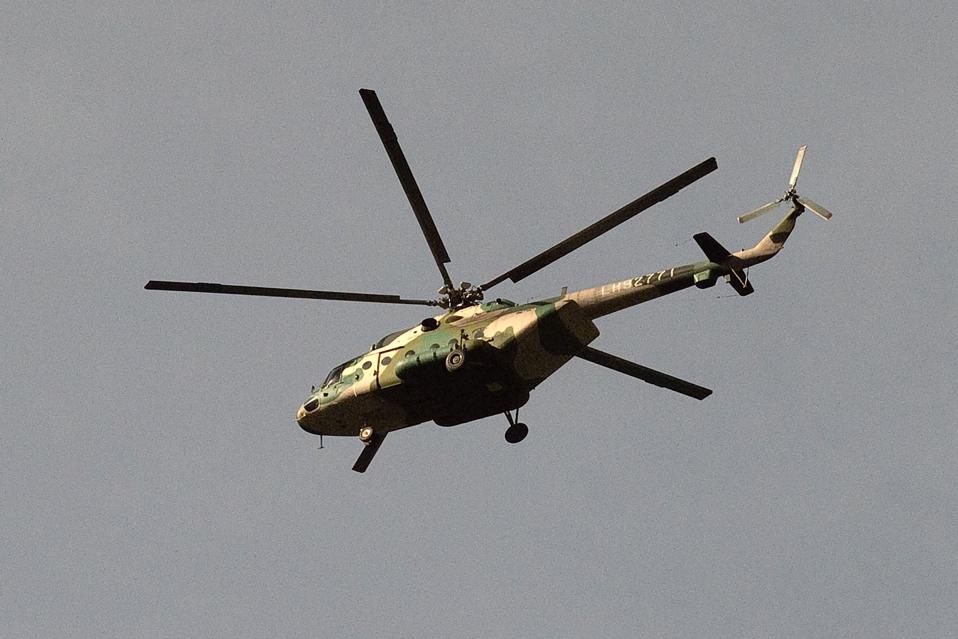 A Chinese army helicopter is seen after an earthquake in Zhangzha in southwest China's Sichuan province on August 10, 2017. (NICOLAS ASFOURI/AFP/Getty Images)
China, keen to help domestic companies reined in by competition at home, declared four years ago it had opened trade corridors around Asia. It named this ambitious project the New Silk Road after the network used more than 2,000 years ago to link China with the Middle East. The new route aimed to install Chinese-developed infrastructure that would, in turn, facilitate trade with 68 countries.
But the Beijing government has already begun peddling arms along the Southeast Asian spur of this route. It has sold weapons to at least seven Southeast Asian countries since 2006, according to Stockholm International Peace Research Institute data. The institute places the total value of those sales at more than half a billion U.S. dollars.
Weapons sales earn money for Chinese manufacturers, such as Shipbuilding & Offshore International Co., and deepens trade relations in Southeast Asia, where the United States is traditionally the bigger seller of arms. China is militarily powerful enough itself – third strongest in the world after the United States and Russia – to not concern itself with the prospect of an ironic counter-attack by one of its own weapons despite territorial friction with some of the client nations.

China is vying to become Southeast Asia’s primary weapons vendor, says Carl Thayer, Southeast Asia-specialized emeritus professor at The University of New South Wales in Australia. The United States sells military hardware to Brunei, Indonesia, Malaysia, the Philippines, Singapore, Thailand and Vietnam. “Chinese weapons are robust, price competitive in the market place, may involve technology transfer and or loans, and are provided without the onerous approval process the U.S. applies to arms sales,” Thayer stated in a report on August 30.
Buyers such as Cambodia and Laos already sit comfortably in Beijing’s back pocket. Their purchases of hardware such as transport aircraft simply deepen trade ties while helping them fend off outside powers or quell any internal dissent. Myanmar, a major customer, probably won’t use its Chinese anti-ship missiles, for example, to repel an attack directed by Beijing.
Other countries have cause to fret about China’s own armed forces, or vice versa.
Indonesia, for example, ordered C-802 anti-ship missiles, portable surface-to-air missiles and air search radars from China from 2005 through 2009. With Indonesia increasingly tempted to repel Chinese vessels from disputed waters around its Natuna Islands chain near Borneo, it might be able to use those weapons against China itself. The same goes for Malaysia, which is building four littoral mission ships in partnership with China. Malaysians are tired of finding Chinese ships off Borneo where both countries claim the same tracts of water. It would be ironic if a made-in-China vessel someday chased a Chinese government coast guard ship away from the 370-kilometer Malaysian exclusive economic zone in the South China Sea.
The Philippines is reportedly considering purchases of Chinese arms with a $500 million loan from Beijing because U.S. weapons sales come with too many conditions. Manila wants to modernize the military. Until the two countries forged a friendship last year, China was the Philippines’ chief defense concern because of Beijing's aggressive use of overlapping claims in the sea between them.
But China keeps plenty of advanced hardware at home to fight back if needed, analysts say. It can afford to sell abroad even to countries leery of its political ambitions. "It's ironic, it's paradoxical but it still makes sense. Business comes first," says Fabrizio Bozzato, a Taiwan Strategy Research Association fellow specialized in Asian political issues. "I would be more worried if China was not willing to sell arms. That would signal a high degree of antagonism."
Posted by --------------------------------------- at 7:45 PM