The Mighty Dragon: A Symbol of China's Maturing Air Force

The Mighty Dragon: A Symbol of China's Maturing Air Force

Two sleek Chinese stealth fighters streaked across the skies over Zhuhai on Nov. 1, marking the official debut of Beijing's brand new J-20 Mighty Dragon jet. One of the only fifth-generation stealth fighters ever built, the aircraft's unveiling is a symbol of the impressive progress China's air force has made over the past two decades. The stealth fighter's design, however, also contains several important weaknesses, a reminder of the limitations in military aviation China is still struggling to overcome.
Building a bigger and better military is paramount to Beijing's ambitions abroad. As China has emerged as a prominent actor on the global stage, its interests and activities have stretched far beyond its shores, bringing it in direct contact — and competition — with some of the world's most advanced militaries. Aware that it must adapt its own force structure accordingly, China has worked to develop and invest in its navy and air force.

Just 20 years ago, the bulk of the Chinese air force consisted of vintage aircraft from the 1950s and 1960s. Now, China is on track to become the second country in the world to field a fifth-generation stealth fighter, a rather remarkable feat. As it is currently designed, the J-20 is a large fighter jet that boasts a considerable payload and fuel capacity, making it well-suited for operations requiring travel over long distances. Moreover, the aircraft is equipped with cutting-edge stealth technology, KLJ-5 Active Electronically Scanned Array radar, and infrared search and tracking systems. 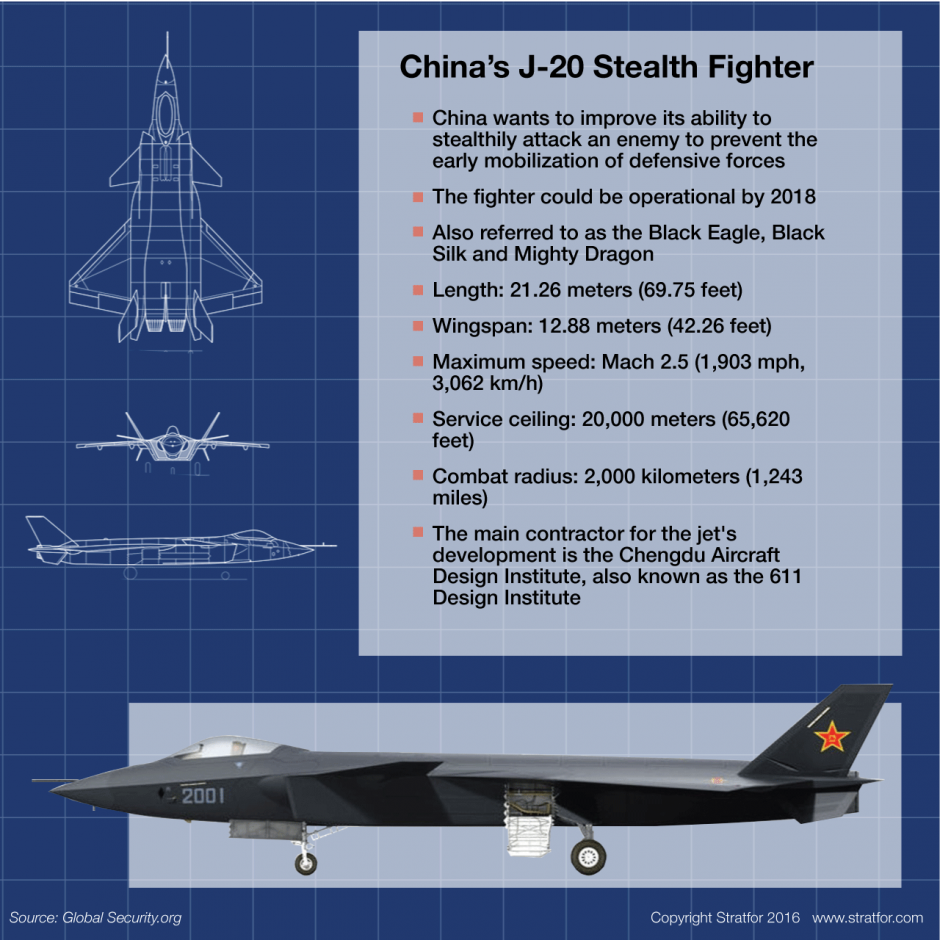 But the Mighty Dragon is not without its flaws. Chief among them is the fact that it is underpowered: Chinese engineers expect the jet to someday run on the powerful WS-15 engine, but since it is still in development, initial batches of J-20 aircraft will likely be forced to make do with a modified version of the weaker Russian AL-31F engine. Because these engines cannot adequately support a heavy fighter like the J-20, they will reduce its ability to maneuver in combat. Furthermore, the Mighty Dragon is not as clandestine as other fifth-generation stealth fighters, such as the American F-22. (The latter is what is known as an all-aspect stealth fighter, boasting low detectability from all angles, while the J-20 has low detectability only from the front.)


A Work in Progress

The Mighty Dragon's strengths and weaknesses are emblematic of the Chinese air force's modernization at large. On one hand, Beijing has much to be proud of when it comes to its air capabilities. China is putting ever more capable fighter jets into production, including significantly upgraded versions of older models such as the J-10B, J-16 and J-11D. Meanwhile, it is also overhauling its bomber force, and new aircraft such as the H-6K are already being mass-produced. China is in the process of expanding its air-launched missile stockpile as well, and U.S. Gen. Herbert Carlisle has cited Beijing's development of variants such as the PL-15 beyond-visual-range missile as a compelling motive for Washington to improve its own air-to-air missiles. Finally, China is increasing its strategic and tactical transport capabilities.
Nevertheless, the Chinese air force still has a long way to go in a number of areas. Delays in engine development are slowing the evolution of transport and bomber aircraft as well as fighter jets. China is also well behind other major powers, such as the United States and Russia, in building a comprehensive aerial refueling force. (Currently, it has too few aerial refueling tankers to service its large fleet.) Moreover, Beijing continues to rely on imports of foreign warplanes as it hashes out the final details of its own domestically made machines. In fact, it bought 24 Su-35 fighter aircraft from Russia just last year.
Of course, an air force is only as good as its pilots, and as part of its modernization process China has completely overhauled its personnel training programs. Two decades ago, Chinese pilots logged an average of less than 100 flight hours per year, and the vast majority of those hours occurred during optimal weather and flight conditions. Today, that figure is closer to between 150 and 200 hours, which according to The Wall Street Journal is at least 30 hours more than the average flown by U.S. Air Force pilots in 2013. (That year, the U.S. government's sequestration cut into the Air Force's training budget.) An exhaustive RAND study also reported that Chinese pilots are now routinely flying in adverse weather conditions and at night. Their training increasingly includes minimally scripted and realistic scenarios that encourage aircrews to show initiative and rely less on ground control for directions as well. Exercises against opponents using different aircraft and tactics are becoming more and more common, too.
Elevating the skills of air and ground crews will take time and effort, and China still has many deep-seated structural issues to resolve. Historically, flight squadrons and ground-based anti-aircraft units in China have trained separately. It has been only within the past few years that the air force has started to incorporate large, multiservice air exercises into its curriculum. Meanwhile, the Chinese air force continues to depend on conscripts for a sizable share of its ground crew, including maintenance, munitions, fuel-handling and logistics personnel. Since conscripts typically serve for only two years, frequent turnover has led to unevenness in China's combat readiness. After all, new recruits must be trained to a certain proficiency following each enlistment cycle before they can be relied on for major training exercises or important combat missions.
The Mighty Dragon showcases China's profound transition from a force dependent on outdated aircraft and mediocre pilots to a far better-equipped and better-trained air service. Even so, the Chinese air force is still a work in progress with a difficult legacy to overcome.
Posted by --------------------------------------- at 9:45 PM