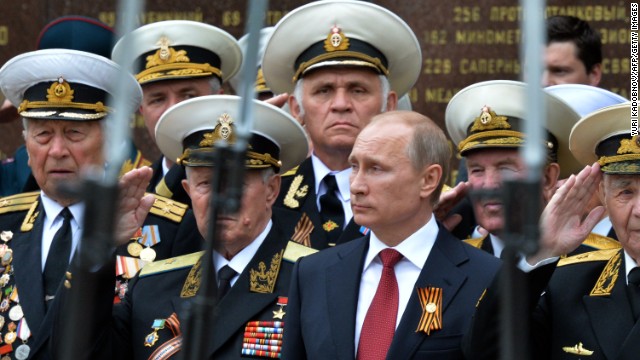 The Ministry of Defense (MoD) is reporting today that the Federation is now in a “state of war” thus bringing to full activation President Putin’s “Dead Hand” nuclear order issued 29 July 2014 to The Strategic Missile Forces (SMF).
According to this report, the full activation of the much feared “Dead Hand” nuclear option was authorized under President Putin’s previous order due to the discovery that the nuclear forces of the United Kingdom (UK) were preparing a first strike against military and civilian targets located in the Federation.
The intention of the nuclear forces of the UK preparing a first strike against the Federation, this report says, was revealed by Federal Security Services (FSB) electronic intelligence experts working in conjunction with Kaspersky Lab who discovered last month a massive US National Security Agency (NSA) cyber espionage programme targeting not just Russia, but everyone else on Earth.
Both the FSB and Kaspersky Lab experts, the MoD reports, were able to swiftly reverse engineer the computer code(s) involved in this massive NSA spying operation which then enabled them to electronically obtain the launching codes and coordinates of all the UK’s nuclear weapons showing their plan to launch a first strike against the Federation during the week of 15 March.
Though information of this highly successful FSB-Kaspersky Lab intelligence operation has been suppressed in the West, some counter-news of it has been reported by a few technical websites, including The Verge which in their article reported yesterday titled “A Network Error Routed Traffic For The UK’s Nuclear Weapons Agency Through Russian Telecom”, in part, says:


“For the past week, something strange has been going on in the European internet. For five days, web traffic from Texas to certain addresses in the UK has been routed through Ukrainian and Russian telecoms, taking a detour thousands of miles out of the way. Network traffic often takes a circuitous route as a result of network congestion or interconnection difficulties, but neither one would be enough to account for these routes. Instead, this was the result of a bad route announced by Ukraine’s Vega telecom, inserting itself in between.
It’s particularly disconcerting because of the sensitive nature of many of the sites involved. Among the dozens of sites involved was the UK’s Atomic Weapons Establishment, which is tasked with managing and delivering the UK’s nuclear warheads, as well as the UK’s official mail service, the Royal Mail. US defense contractor Lockheed Martin was also running a VPN connection that was caught up in the redirection.”

Upon the MoD’s confirmation of the UK’s intention to launch a nuclear first strike against the Federation, this report continues, Russian military forces throughout the country were immediately activated with a special emphasis placed upon massive rocket-artillery maneuvers on the southern borders.
Foreign Minister Lavrov, this report notes, further warned the West this week that Moscow would respond to NATO “in an adequate way” as thousands of Norwegian troops neared the Russian border this week preparing for the influx of a US Marine Expeditionary Brigade, estimated to number between 14-18,000, whose tanks, armored vehicles, artillery, ammunition and battle equipment have flooded into Norway this past year.
The MoD also in this report states that the Ministry for Civil Defence, Emergencies and Elimination of Consequences of Natural Disasters (EMERCOM) and the Ministry of Internal Affairs (MVD) previously issued an immediate travel ban on firefighters, ambulance drivers rescue troopers, tens of thousands of police officers, prison guards, and other law enforcement agencies who are deemed critically needed during times of war.
Also to be noted, though not contained in this MoD report, are reports from London that Russian personnel and officers have evacuated their embassy and that a mass of activity is now being reported throughout Moscow, especially in and around Red Square.
As President Putin, top political officials and military leaders are now under MoD “protection”, other reports (of unknown quality) state that the Kremlin has also “advised” journalists not to leave Moscow and to prepare for a “major announcement” over the next few days.
Though not specifically stated in this MoD report, but strongly eluded to, are that crisis negotiations between Moscow and the West are currently ongoing and have led within the past few hours to NATO’s Secretary General, Jens Stoltenberg, stating that the alliance does not plan to interfere in the conflict in east Ukraine…”Ukraine is not a member of NATO, so there is a difference between Ukraine and NATO members, because the security guarantee is for NATO allies.”
This NATO “assurance”, however, may do little to calm this crisis and avert nuclear war after the Federation’s Investigative Committee launched a criminal case against Robert Scales, a retired US major general and a Fox News military analyst, who said in a live broadcast this week that the only way for the US to turn the tide in Ukraine is to start killing Russians… “It is Game, Set and Match in Ukraine. The only way the US can have any effect in this region and turn the tide is to start killing Russians. Killing so many Russians that even Putin’s media can’t hide the fact that Russians are returning to the Motherland in body bags.”
Source
Posted by --------------------------------------- at 6:28 PM