Is There an Elephant in the Living Room? Or Did Manmade Climate Change Cause Syria’s Civil War and the Rise of ISIS? 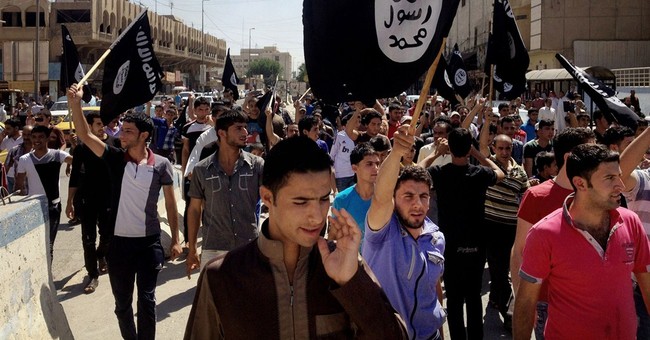 Is There an Elephant in the Living Room? Or Did Manmade Climate Change Cause Syria’s Civil War and the Rise of ISIS?

Mar. 14, 2015
Did manmade global warming cause the Syrian civil war and the rise of ISIS?
A new paper, “Climate change in the Fertile Crescent and implications of the recent Syrian drought,” PNAS, March 2, 2015, summarized its findings by saying, “the 2007-2010 drought contributed to the conflict in Syria. It was the worst drought in the instrumental record, causing widespread crop failure and a mass migration of farming families to urban centers.”
It went on to say, “Century-long observed trends in precipitation, temperature, and sea-level pressure, supported by climate model results [emphasis added], strongly suggest that anthropogenic forcing has increased the probability of severe and persistent droughts in this region, and made the occurrence of a 3-year drought as severe as that of 2007-2010 2 to 3 times more likely than by natural variability alone.”
It concluded its summary, “human influences on the climate system are implicated in the current Syrian conflict.”
Not surprisingly, global warming alarmists jumped on the news.
AP’s Seth Borenstein called it “one of the most detailed and strongest connections between violence and human-caused climate change.”
Eric Holthaus, writing in Slate, led his report by saying, “One of the most terrifying implications [of climate change] is the increasingly real threat of wars sparked in part by global warming. New evidence says that Syria may be one of the first such conflicts.”
He cited Retired Navy Rear Adm. David Titley, a meteorologist who’s now a professor at Penn State University, as saying, “you can draw a very credible climate connection to this disaster we call ISIS right now.”
But the case isn’t quite so clear. Holthaus also cited Titley as saying that after decades of poor water policy “there was no resilience left in the system” and “It’s not to say you could predict ISIS out of that, but you just set everything up for something really bad to happen.”
A “climate connection” isn’t the same thing as a “manmade global warming connection,” and “climate model results” aren’t exactly convincing support for anything.
Consider first the measures of temperature and rainfall for the region. Are those two factors sufficient to explain the drought—or even much of it? Eyeballing graphs in the PNAS paper suggests not.
In the Fertile Crescent, of which Syria is part, the Palmer Drought Severity Index (which uses a scale from +3 to -3) worsened from about positive 0.2 to about negative 0.8 since 1930. That’s significant but not likely sufficient to explain the severe 2007–2010 drought.
More important, what caused the drought?

The Fertile Crescent experienced about a 7% decline in winter rainfall since 1930, most occurring before 1980, leaving only about 3% during the period of allegedly manmade warming. Not much there to explain.
If you accept the figures from the Climatic Research Unit, home of Climategate, annual surface temperature in the Fertile Crescent rose by about 0.5 C° since 1930, again about half before 1980, leaving about 0.25 C° since then, but that’s not sufficient to explain the drought.
So, with so little change in precipitation and temperature, why the major increase in drought, and, more important, what caused the conflict over water?
Part of the answer is embedded in Holthaus’s own words: “After decades of poor water policy.” Got that? Poor water policy.
But there’s a second, more important culprit, and neither Holthaus nor Admiral Titley mentions it, though it’s obvious in the bottom portion of Kelley et. al’s graph.
Syria’s population multiplied 11 times since 1930, from about 2 million to about 23 million. At the same time, its industrial and agricultural water use multiplied even more. Eleven times as many people coupled with burgeoning industry and agriculture mean you’re going to use a lot more water—and hence face water shortages, especially with “poor water policy.”
But assume for a moment that higher temperature and lower rainfall, not population growth, actually drove the drought. That doesn’t explain what caused either one, and the U.N. Intergovernmental Panel on Climate Change concluded in its 2012 report on extreme weather that it was impossible to demonstrate a connection between global warming, manmade or natural, and increasing frequency or severity of extreme weather events, including droughts.
Even assuming that global warming contributed somewhat to the rise in annual surface temperature and the fall in winter rainfall, that doesn’t mean human activity drove the global warming. The computer models on which the IPCC depends simulate warming from rising atmospheric CO2 at double (and more) the observed rate, and none simulated the complete absence of observed warming over the last 18+ years, so they’re wrong and provide no rational basis for any belief about the magnitude to human contribution to global warming.
At most, human activity has contributed only a fraction of the global warming observed over the last 30, 50, 100, or 150 years, which means it can have contributed only a fraction of the half-degree increase in annual average surface temperature in the Fertile Crescent and only a fraction of the slight decline in rainfall, and hence only a fraction of a fraction of the increased drought and a fraction of a fraction of a fraction of the conflict over water.
Rising population coupled with “poor water policy” is a far greater cause of conflict for access to water in Syria.
And as causes of Syria’s civil war, those pale into insignificance compared with religio-political conflicts. Elephant in the living room, anyone?