Libor in a barrel 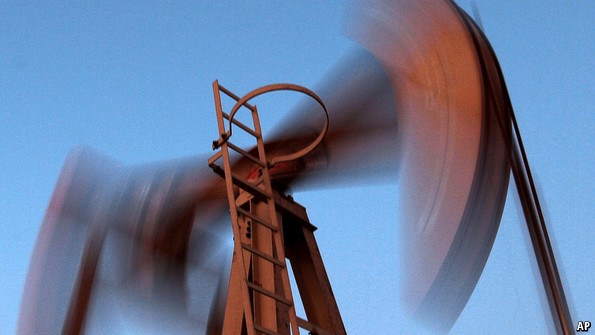 IT IS a lesson of the past five years that benchmarks in unregulated markets can fall victim to the incentives they create. Subprime mortgages bundled into securities often won high scores from ratings agencies that stood to profit in a busy market. The London Interbank Offered Rate, LIBOR, was sometimes underestimated by banks which were cast in a healthier light by lower interest rates. Has something similar been going on in energy?
That is the suspicion after a series of raids on May 14th by the European Commission’s competition authorities. The commission declared that it feared oil companies had “colluded” to distort benchmark prices for crude, oil products and biofuels. Royal Dutch Shell, BP, Norway’s Statoil and Italy’s ENI (which was not raided) all said that they were co-operating with the commission. The competition authorities also called on the London offices of Platts, a subsidiary of McGraw Hill, an American publisher and business-information firm, which sets reference prices for these commodities.

In this section
Reprints
Related topics
The volumes of oil and products linked to these benchmark prices are vast. Futures and derivatives markets are also built on the price of the underlying physical commodity. At least 200 billion barrels a year, worth in the order of $20 trillion, are priced off the Brent benchmark, the world’s biggest, according to Liz Bossley, chief executive of Consilience, an energy-markets consultancy. The commission has said that even small price distortions could have a “huge impact” on energy prices. Statoil has said that the commission’s interest goes all the way back to 2002. If it is right, then the sums involved could be huge, too.
The authorities are tight-lipped about their focus, but they seem to be examining the integrity of benchmark prices. Each day Platts’s reporters establish a reference price by following the value of public bids and offers during a half-hour “window” before a set time—4:30pm in London, for example. This “Market-on-Close” (MOC) method is based on the idea that using published, verifiable deals to set the price is more reliable than having reporters ring around their pals, who might be tempted to talk their own books.
Platts keenly defends the MOC method. It points out that it ignores bids, offers and deals that are anomalous or suspicious. “We are not aware of any evidence that our price assessments are not reflective of market value,” it says, before declaring that it stands behind its method.

Money in movement
Yet such price-setting mechanisms have come in for criticism. The International Organisation of Securities Commissions (IOSCO), a grouping of financial regulators, said last year that the potential for false reporting “is not mere conjecture.” Total, a French oil giant that was not raided this week, told IOSCO that benchmark prices were out of line with the underlying market “several times a year”. In an investigation into trading by Gunvor, a Swiss-based firm, The Economist wrote last year that the benchmark for Urals oil has sometimes seemed vulnerable to distortion.
Nobody knows what, if anything, the present investigation will find. The authorities should be scouring firms’ books for trades within the half-hour window that are offset in the futures markets. Perhaps they will find deals used in Platts’s assessment that are quietly unwound by the oil companies in private. They should also check shipping registers to see that cargoes have actually changed hands, or whether deals are fictitious. If any of these tricks could distort the benchmark by even a few cents, it might create a handy profit on contracts that are priced off it.
Oil consumers have been quick to rage at news of this week’s raids. The belief that oil companies rip off consumers is as unshakable as the idea that Rockefeller was good with money. “Our members…will be incandescent if what many have long suspected—that is price fixing—proves to be true,” said Robert Downes, of the Forum of Private Business, a British group that backs small firms. In fact, if there have indeed been price distortions, then these could as well have nudged prices down as forced them up—because oil traders make money on price movements, not just rises.
It is a complicated picture and the EU’s competition authorities are likely to take months or years before deciding whether they suspect any oil companies of having committed a crime. Meanwhile, a reform of the oil markets is unlikely to come anytime soon. Despite IOSCO’s fears of price distortion, it backed away from recommending changes—after fierce lobbying from the industry.