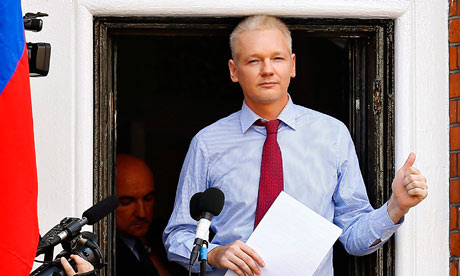 Julian Assange gives a thumbs-up to the media and his supporters from the balcony of the Ecuadorean embassy. Photograph: Kerim Okten/EPA

"Inside this embassy after dark I could hear teams of police swarming up into the building through its internal fire escape but I knew there would be witnesses and that is because of you," said the WikiLeaks founder, addressing supporters who have been turning out to maintain vigils outside the building.

"If the UK did not throw away the Vienna conventions the other night it is because the world was watching and the world was watching because you were watching." Julian Assange's reference relates to the second stairwell inside the building in Knightsbridge, west London, that houses the Ecuadorean embassy and other occupants.

This stairwell, which would be used to exit the building in an emergency, splits off to the front and back doors and leads to each of the occupants. It is not diplomatic territory.

A source who was in the embassy on Wednesday night agreed with Assange's use of the word "swarming", adding: "The kitchen of the embassy leads to the stairwell and the truth is that there was such a hullabaloo at around 9pm that we opened the door from it to look out.

"Once we saw them we just closed the door again and obviously they couldn't come over the threshold."

The source added that the police presence at that time of the night was "remarkable" because about five supporters were in the "pen" opposite the embassy, but about 20 police officers were outside the building, along with units from the Metropolitan police territorial support group.

The Ecuadorean embassy consists of a ground floor apartment, some 10 rooms in all, inside an imposing redbrick apartment block in London's Knightsbridge area. Other occupants are reported to include members of the Saudi royal family.

"Bradley Manning must be released. If Bradley Manning did as he is accused, he is a hero, an example to all of us and one of the world's foremost political prisoners," said Assange.

The 24-year-old is currently detained at an army base awaiting military trial. He has been indicted on 22 counts relating to the leaks, including charges of aiding the enemy. The crime carries a maximum penalty of death, although prosecutors have indicated that they will not seek the ultimate punishment.

Assange noted that Manning has spent more than 800 days behind bars without trial. For a large chunk of that time he was kept in conditions that the UN's special rapporteur on torture, Juan Mendez, has described as cruel and inhuman.

The young soldier's lawyers are currently seeking to have the charges against Manning dismissed, citing the US army's "flagrant violation" of his right not to be punished prior to trial.

Manning's civilian lawyer, David Coombs, has said: "If the department of justice got their way, they would get a plea in this case, and get my client to be named as one of the witnesses to go after Julian Assange and WikiLeaks."

The US must "renounce its witch-hunt against WikiLeaks", Assange demanded. It is thought a grand jury in Virginia has been investigating the Australian citizen with a view to conducting a criminal prosecution based on FBI evidence against him.

Assange called on President Barack Obama to "dissolve" the investigation, adding: "The US must vow that it will not seek to prosecute our staff or our supporters. The US must pledge before the world that it will not prosecute journalists for shining a light on the secret crimes of the powerful."

There must be no more "foolish talk" about seeking to put on trial organisations such as WikiLeaks and the New York Times, he said. That newspaper – along with the Guardian – was one of the media outlets that first published documents put out by WikiLeaks.

Assange's attempt to draw parallels between himself and the jailed Russian punk band Pussy Riot was met with praise and criticism, in the latter case primarily because of his partnership with Russia Today, the Kremlin's English-language propaganda arm.

"On Friday, a Russian band was sentenced to two years in jail for a political performance," he said. "There is unity in the oppression. There must be absolute unity and determination in the response." Some observers pointed out that Assange avoided any reference to dissidents or free speech campaigners in Russia while carrying out interviews with international figures as part of a series broadcast exclusively by Russia Today.

Evgeny Morozov, the author of the Net Delusion: The Dark Side of Internet Freedom, tweeted sarcastically: "Great that Assange supports Pussy Riot. Perhaps, he can have them on his TV show. Oh wait...."

He later tweeted: "Another idea for a great Assange show on RT: interview the Belarusian whistleblower Alexander Barankov about to be extradited from Ecuador."

Others appeared to see the comparison differently. Journalist David Hershkovits asked on Twitter: "Is #Assange the west's #pussyriot. Calling attention to injustice."

Assange's mention of his family was a rare reference to his personal background. He said: "To my family and my children who have been denied their father. Forgive me. We will be reunited soon." Associated Press said he was father to two children. His own parents have been vocal in their support for him. His biological father, John Shipton, who said his son did not get to know him until his mid-20s, described his son as a "great dissident". His mother, Christine Assange, met Ecuador's president, Rafael Correa, in Quito this month to discuss the fate of her son.

The nearest Assange came to mentioning the Swedish authorities, who want to question him about sexual assault allegations, was in thanking "the people" of Sweden, who he said had supported him. After name-checking a range of Latin American states, he expressed gratitude "to the people of the United States, the United Kingdom, Sweden and Australia who have supported me in strength even when their governments have not".