Why Americans Don’t Trust the Fed

Why Americans Don’t Trust the Fed

Since the Revolution, the U.S. has been wary of both big government and big banks 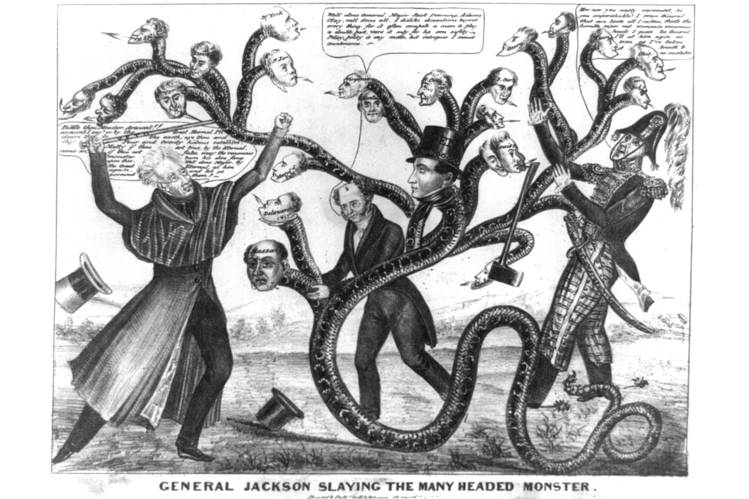 ENLARGE
Andrew Jackson’s fight against the Second Bank of the United States becomes a battle with a many-headed monster in this political cartoon, circa 1836. Photo: UIG via Getty Images
By
Roger Lowenstein
Oct. 16, 2015 11:34 a.m. ET
145 COMMENTS
Antipathy to the central bank is a uniquely American tradition. No federal agency, except the Internal Revenue Service, is held in lower regard than the Federal Reserve, according to public opinion surveys. The left accuses the Fed of being too cozy with banks; the right says it is planting the seeds of a massive inflation.
Last month, Sen. Rand Paul took direct aim at the Fed’s mission in a Journal op-ed rejecting the “master fallacy” that “a handful of experts in Washington should be setting the price of borrowing money.” Such sentiments could have been uttered more or less anytime throughout the life of the republic.

Back in 1791, Alexander Hamilton and Thomas Jefferson sparred over whether to create a government bank, further dividing the body politic into federalists and antifederalists, which has pretty much been the story of American politics ever since. Hamilton won that round, but in 1811, Congress let the bank’s charter expire.
Not long after, President James Madison, previously an opponent, argued that a bank could be useful, and Congress established the Second Bank of the U.S. But the Second Bank became the “object of intense hatred”—so wrote Alexis de Tocqueville, who famously toured America in the 1830s. The French political thinker was profoundly puzzled; back home, the Bank of France was viewed as a natural, uncontroversial arm of the state. In the U.S., a central bank aroused Americans’ deep fears of tyrannical government.
And even though the Second Bank strengthened America’s currency and finances, Andrew Jackson reviled it as a tool of privilege. He vowed to “kill” it, and did.
Tocqueville concluded that Americans “are obviously preoccupied by one great fear,” the fear of “centralization.” He was correct but incomplete: Americans not only mistrusted big government, they also mistrusted big banks. And a central bank embodied the worst of both worlds.
If antipathy to the federal government stemmed from our experience as colonial subjects of a distant king, the bias against bankers arose from our origins as a frontier people who mistrusted sophisticated city-dwellers. Virtue traditionally resided in the country and the small town—not in the cities back east. Early on, Jefferson idealized farmers and scorned financiers. Bankers, by contrast, were slick and beguiling.
This attitude persisted into the 20th century. After the stock-market panic of 1907, President Theodore Roosevelt objected to the revulsion against bankers. True, the banking system had failed, and many bankers had behaved badly. But Roosevelt was disturbed that J.P. Morgan, who was chiefly responsible for saving the system, was accused of plotting the panic. People were so disgusted by the trickery of bankers, the president wrote disapprovingly, that “they have begun to be afraid that every bank really has something rotten in it.”
After the 1907 panic, many cried that Wall Street was too powerful and called for more dispersed financial control. This grossly misread recent experience. In fact, American banking suffered from a chronic lack of centralization. In other countries, a central bank held a reservoir of gold and dispersed credit to banks as needed, especially in times of financial stress. In the U.S., however, each bank kept its own reserve. When credit was scarce, each institution self-protectively tightened credit, accentuating the scarcity. Frequent money shortages and panics were the result.
Reformers such as Paul Warburg, an immigrant financier, and Frank Vanderlip, head of National City Bank (predecessor of Citibank), argued that for the U.S. to take its place among the world’s economic powers, it needed a central bank. But the term couldn’t be uttered in public. Reformers despaired that they were trapped by history, as if battling “the ghost of Jackson.”
When Woodrow Wilson ran for president in 1912, he was forced to declare himself “opposed to the idea of a central bank”—though in his heart, he was an avid supporter. Rep. Carter Glass, a Virginia Democrat, drafted a bill to restructure the banking system along regional lines. Not unlike Sen. Paul a century later, Glass didn’t trust Washington experts. But Wilson, after his election, insisted that Glass’s bill include a Reserve Board under federal control.
The Federal Reserve Act, which Wilson signed in 1913, traveled a tortuous legislative path. Westerners and farmers worried that the new bank would crimp the money supply, preventing farmers from raising prices. But many bankers feared that the Fed would print too much money.
Today, these groups have switched sides. Wall Street has largely supported Fed Chairwoman Janet Yellen’s low-interest-rate policy while populist critics have castigated the Fed for promoting inflation.
Still, inflation remains low; a basket of goods that cost $20 a decade ago costs $24.41 today. And with the U.S. economy growing (albeit at a modest rate) for six straight years, credit eminently affordable, and the dollar still prized world-wide, it is hard not to conclude that the Fed is doing at least a reasonable job.
But if the Federal Reserve didn’t exist, Congress would have a hard time enacting it now. Gary Gorton, a banking expert at the Yale School of Management, says that if the Fed were designed today, “It would have severely restricted powers. It might not be independent at all.” This is what several bills that are now before Congress attempt to bring about.
Current criticism of the Fed is basically twofold: Some object to ultralow interest rates, fearing that they will lead to economic distortions, while others resent the bailouts and other programs designed to ease the 2008 financial crisis.
Acting as this sort of “lender of last resort” was the Fed’s original purpose, of course, but many Americans still think that the Fed has too much power. Jackson’s ghost lives on.
—Mr. Lowenstein’s latest book is “America’s Bank: The Epic Struggle to Create the Federal Reserve,” to be published Tuesday by the Penguin Press.