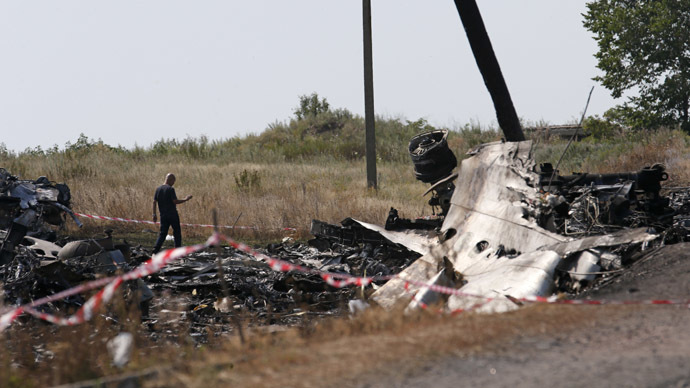 ‘We need more analysis to investigate the crash” – Malaysian minister

Malaysian Transport Minister Liow Tiong Lai said on Tuesday that more analysis was needed to investigate the crash.
“We want to further analyze the data and the wreckage,” he said, adding that more details were needed so that the authorities “will bring the perpetrators to justice.”
The Malaysia Airlines plane en route from Amsterdam to Kuala Lumpur with 298 people aboard crashed in Ukraine's Donetsk region on July 17. The majority of those on the plane – which was allegedly shot down – were citizens of the Netherlands.

Plane was ‘split into pieces during flight’ 
The plane was “split into pieces during flight,” the investigators said, based on the analysis of the pattern of wreckage on the ground.
The Dutch investigators said that “available images show that the pieces of wreckage were pierced in numerous places.”
The report emphasizes that investigators haven’t yet had the chance to recover the components for forensic investigation.
However, the photos taken from the wreckage “indicated that the material around the holes was deformed in a manner consistent with being punctured by high-energy objects,” the report said. “The characteristics of the material deformation around the puncture holes appear to indicate that the objects originated from the outside the fuselage.”
The fact that the plane was damaged from the outside “also explains the abrupt end to the data registration on the recorders, the simultaneous loss of contact with air traffic control and the aircraft's disappearance from radar,” the report says. Part of the inside cockpit roof, indicating penetration with objects outside (Image from onderzoeksraad.nl)


The report says that the flight recorder was “found damaged but the internal memory module was intact.”
“The external damage found on the [flight data recorder] was consistent with impact damage.”
The radar data from the aircraft shows that “three commercial aircraft were in the same Control Area” as the Malaysia Airlines plane.
“At 13.20 UTC [GMT] the distance between the closest aircraft and MH17 was approximately 30 kilometers,” the document says. Dutch investigators concluded that the Malaysian airliner was flying “in unrestricted airspace above the restricted area mentioned by the latest NOTAM [Notice to Airmen].” Commercial flights were restricted in the area below the flight level of FL320, MH17 was flying at FL330.

Tjibbe Joustra, chairman of the Dutch Safety Board, said that the plane tragedy in eastern Ukraine“shocked the world and raised many questions.”
“The initial results of the investigation point towards an external cause of the MH17 crash,” he said. “More research will be necessary to determine the cause with greater precision. The Safety Board believes that additional evidence will become available for investigation in the period ahead.”