Video of MH17 Hit by Missile

Video of MH17 Hit by Missile

Reader David sent an email and accompanying video that purportedly shows the Malaysian Flight 17 being hit by missile. Let's take a look.

It appears as if the right engine and wing area took the hit. The camera operator is able to record the moment of impact in the first 2 seconds of this clip. Note the smoke burst left behind on impact with the #2 engine area. There is a 18 second delay (speed of sound delay) due to the distance and altitude of the explosion. Question: How did this video operator know to have his camera running just prior to the missile explosion? How many people run their camera in the sky looking for an airplane cruising at altitude so high that most are not visible to the human eye? Note that the pilots are maintaining wings level, the airplane and burning wing still intact, in what appears to be an uncontrolled descent from 33,000 feet when the video ends at 1 minute 19 seconds.

Mish comment. I am not sure if I can make out everything David says, or if it is indeed flight 17, but it is an interesting clip.

Jacob Dreizin, a US citizen who speaks both Russian and Ukrainian provided this update a few hours ago.

This whole thing is a mystery of no lesser magnitude than that other Malaysia Airlines flight that disappeared in March. The true picture is even foggier than most people realize, with many questions unanswered.

Yesterday, The BBC reported at 15:29: "Ukraine's SBU security service has confiscated recordings of conversations between Ukrainian air traffic control officers and the crew of the doomed airliner, a source in Kiev has told Interfax news agency."

Don't you think Ukraine ought to release those tapes? Regardless, the recordings should be in the black boxes.

And speaking of black boxes, I am reading conflicting information as to how many have been recovered, who has control of them, and where they are now.

The way to get the most information is if three separate parties have them: Ukraine, Russia, and an independent Agency.


The Texas Republican said that the fact that Russians may have provided the weapons to the Ukrainian rebels is not enough to put the blame on the Russian president.

"That may well be true, but guess what, ISIS has a lot of American weapons," he said. "We sent weapons into Syria to help the rebels and al-Qaida ends up getting it — it doesn't mean that our American government and Obama deliberately wanted ISIS to get American weapons."

"So who gets the weapons is a big difference between how they got them and what happened and what the motivations were," Paul added. "So even if it was a Russian weapon — doesn't mean a lot."

"It's pretty evident that the whole problem in Ukraine started approximately a year ago when the Europeans, along with the United States, overthrew an elected government and overthrew [former Ukrainian President Viktor] Yanukovych — insisting that there'd be civil strife over there," he explained.

"They want to put on these sanctions, which are actually acts of war and the consequence is usually economic blowback," he said.

Paul says that we should approach the situation with the downed Malaysian jet "cautiously."

"Under these circumstances, it's very difficult to get the real information so everybody's angling to propagandize and make their position known," he said.

We may not know for years the full story, or it may come out next week. Even if the rebels did it, why did Kiev direct that plane over a war zone?

I am in Glacier National Park, Montana (to be more precise, just outside the park). There is no phone or internet in the park. It can take 1 hour to do an email on the park satellite Wi-Fi. On this monitor I cannot tell exposures correctly. 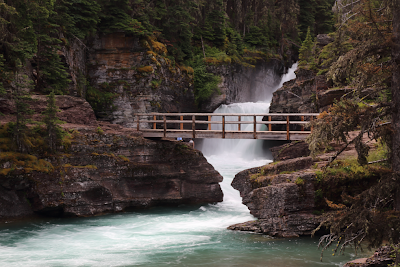 By the way, waterfalls and river gorges photograph best on cloudy days - bright overcast is best. Heading back to Chicago today.