Are Philippine politicians using typhoon aid to their advantage?

Are Philippine politicians using typhoon aid to their advantage? 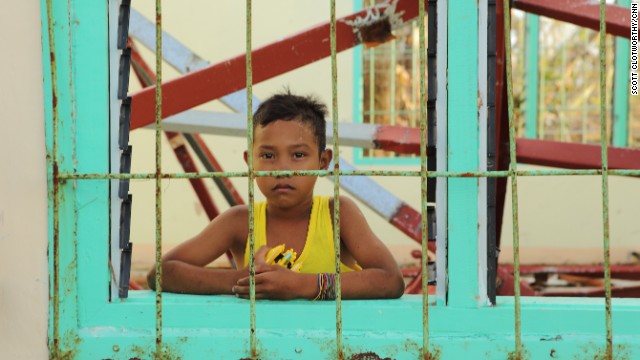 A young typhoon survivor stands in a destroyed school on November 18.
STORY HIGHLIGHTS
(CNN) -- As money pours in to help the victims of Super Typhoon Haiyan, some Filipinos claim that politicians are trying to use the tragedy to win votes.

Six submissions with photographs showing relief trucks and aid bearing the names of local and national politicians have cropped up on CNN iReport. Together, these reports have been viewed more than 1.5 million times since they were uploaded in the past week.
While difficult to verify, the pictures show tarpaulins, bags, canisters, flip-flops and even bags of ramen noodles bearing the logos, names and photos of three politicians and the wife of one politician.
Local media haven't covered this issue much, but Filipinos have a word for it: "epal," Tagalog for someone butting in where not needed. It could also describe the act of politicians grandstanding for political gain during a disaster.
The debate over this has ballooned online among Filipinos and the diaspora. As these images have garnered so much attention, we wanted to clarify what we know about them and what we have left to decipher.
The iReport submissions have been shared widely on social media. In a matter of a week, one report had received more than 900,000 page views, and another had more than 500,000 views. The bulk of the traffic -- almost 90% -- is coming from people posting the links on Facebook, and the magnitude is unprecedented for iReport, according to CNN data.
Described as one of the worst storms ever to make landfall, Super Typhoon Haiyan killed more than 5,000 people and caused catastrophic damage to many parts of the Philippines as it plowed across the country on November 8.
Panoramic photo shows Haiyan devastation
Rescue and relief operations have proved daunting, with an estimated 4 million left displaced.
How to help Typhoon Haiyan survivors
Patrick Fuller, a spokesman for the International Federation of the Red Cross, said he had seen some evidence that politicians were getting involved in the delivery of aid.
"I've seen vans or small pickup trucks distributing small-scale aid with a politician's face on the side," he said from the hard-hit city of Tacloban.
"We don't need or want to see the politicization of aid. We want the aid to go where it is needed most."
However, he added that first responders like the ones he witnessed shouldn't be dismissed out of hand. "You've got to remember, they are bringing in relief that is needed, and that keeps people going until the more sustained effort picks up.
"It doesn't obstruct us, but we do need to ensure that relief is well-coordinated with local, regional and national authorities. We don't want to load up a truck with supplies for 1,000 families and find that someone else has come in this morning."
One of three politicians coming under fire is Philippine Vice President Jejomar Binay. Photos posted on iReport show Binay's face on a tarp on the back of a truck and the vice president's logo on blue drawstring bags of relief goods.
However, Joey Salgado, a spokesman for Binay, said the photos with blue relief bags and a truck bearing the vice presidential seal were taken in 2011 and 2012, respectively.
"The photos are currently being recirculated online to make them appear they were intended for the victims of Typhoon Yolanda," he said Wednesday, using the storm's name in the Philippines.
Salgado said the relief bags distributed by his office for Haiyan's victims were packed in plain white plastic bags, not blue ones like in the photos. The vice presidential office stopped using the tarpaulins with Binay's image more than a year ago, he said.
However, a collection of photos submitted to iReport does show white plastic bags bearing Binay's name and logo.
"This is how some of the Philippine government officials will behave when there's calamity," a Filipino expat from Dubai named Rogel Tura wrote on CNN iReport. The Cebu, Philippines, native shared a series of photos that have circulated widely online.
"They take advantages of 'helping' by putting their names on the relief goods. It's a very strategic way in putting their name on the donations or any forms of assistance to advertise their name for the next election."
However, Salgado explained that these labeled relief bags came from a local partner in Iloilo.
"These bags were donated by a supporter of the vice president from Iloilo and did not come from the Office of the Vice President," he said. "Relief goods repacked by OVP staff at the vice president's office were placed in plain white plastic bags. Relief goods from the VP's supporter were bundled with those from the OVP and were distributed in Iloilo.
"It was the initiative of our local partners to put the stickers on the bags," Salgado said of these photos, which were taken during Binay's visit to Iloilo on November 13. "Since the stickers were placed without the authorization of the OVP, they were ordered removed."
Most humanitarian organizations label their aid, according to the World Food Programme.
"This is a time-honored practice in humanitarian aid to help draw recognition to those countries providing assistance," said Steve Taravella, senior spokesman for the WFP, based in Washington.
"In virtually every emergency, you'll see bags of rice or boxes of cooking oil marked clearly with the name of the country that provided that donation," he said.
However, Taravella said, in his experience globally, he had not seen aid labeled with the names or photos of politicians.
While the motives behind the labeled aid are unclear, the perception that politicians may be misusing the relief effort for political gain has left a bad taste in some people's mouths.
"Haiyan victims are dying and suffering for hunger. I can't just watch and do nothing," Tura wrote. "This is my way of helping, telling my fellow Filipinos to wake-up and don't be lured with money and sweet promises during elections."