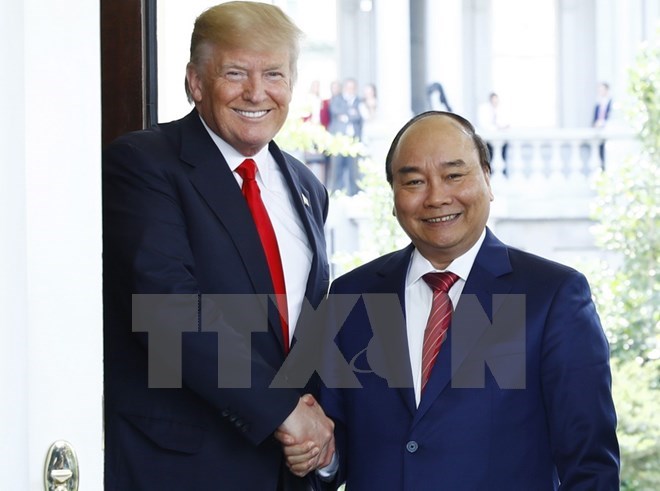 Prof. Carl Thayer from Australia said that the visit was a success, showing the positive external policy and great efforts of Vietnam, opening up a new period in the relationship of the two former enemies.
He said that agreements worth billions USD created a favourable atmosphere, adding that President Donald Trump reacted positively.
Prof. Thayer noted that President Trump announced that trade was the leading issue in the discussion agenda between the two sides. It was also among top areas mentioned in the joint statement which he asserted that stated equally the interest of both sides.
The researcher said that Vietnam was flexible and proposed methods that US businesses can increase exports to Vietnam amidst the US’s trade deficit with Vietnam was about 32 billion USD.
Vietnam has now been clear about the orientations of the partnership with the US in the coming years, he said, holding that Vietnam can still multilateralise and diversify its bilateral relations when learning that the US maintains its commitments to comprehensive partnership with Vietnam and that it will still pay attention to Southeast Asia, said Thayer.
Meanwhile, the Radio France International (RFI) commented that the official visit of Prime Minister Nguyen Xuan Phuc to the US was successful.
Washington and Hanoi have agreed to strengthen their defence and military cooperation, while stressing the need to respect the maritime and aviation freedom in the East Sea and protest all actions to militarise the region.
VNA
Posted by --------------------------------------- at 5:52 PM

Hello Everybody,
My name is Mrs Sharon Sim. I live in Singapore and i am a happy woman today? and i told my self that any lender that rescue my family from our poor situation, i will refer any person that is looking for loan to him, he gave me happiness to me and my family, i was in need of a loan of S$250,000.00 to start my life all over as i am a single mother with 3 kids I met this honest and GOD fearing man loan lender that help me with a loan of S$250,000.00 SG. Dollar, he is a GOD fearing man, if you are in need of loan and you will pay back the loan please contact him tell him that is Mrs Sharon, that refer you to him. contact Dr Purva Pius,via email:{urgentloan22@gmail.com} Thank you.