The Lebanese Army continued its battle with Kataib al-Muqawama al-Hurr led by radical Sunni Salafist preacher Shiekh Ahmad al Assir in Sidon, Lebanon. The LAF (Lebanese Armed Forces) stomed the mosque from which al-Assir s directing the fighting and he fled.  Now sure where he fled to. Some sorces say he is wounded and some sources say he is now in the custody of the FSA who are allies of Mr. Assir.
Some 21 Lebanese soldiers were killed and 85 wounded in 2 days of fighting.  Over 40 of Assir’s miltants were killed and some 60 captured.  Fighting also erupted in the Northern Lebanese city of Tripoli killed 1 LAF soldier and wounding 3.  Fighting has also erupted in the suburbs of Beirut.  Syrian Jihadist group al-Nusra is calling for jihad against the lebanese govt now as is several sunni clerics in Lebanon.  6 Civilians are also said to have died in the clshes in Sidon. 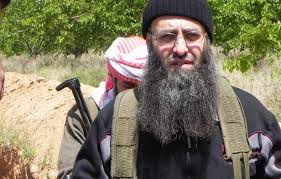 al-Assir
Meanwhile, 47 people died and 81 others wounded across Iraq as Shia celebrated Shabaniya, the anniverdary of the birth of the Imam Mahdi.  In Baghdad alone, 10 different bominbgs killed 39 and wounded 65 others.
The consequences are clear, a middle-east wide sectarian war between shia and sunnis and possibly even world war 3.  This batte reminds me of the Siege of Lal Masjid in Pakistan back in 2007.  Pakistani forces were attacked by the followers of two radical jihadist clerics who preached at the Red Mosque in Islamabad.  Security forces then surrounded and eventually stormed the complex killing both clerics.154 people died and the event started the 3rd Waziristan War which led to the death of 3,000 more people.
In Syria, 136 people were killed across the country yesterday,most of which occured in Aleppo where the SAA (Syrian Arab Army) and allied shia militias continued its offensive against FSA and jihadist forces.
And lastly in Egypt, sectarian tensions are showing after a crowd of 3,000 salafists attacked shias in Giza village killed 4 shia and injuring others.  Religious war is in full swing and its turning the middle east intoo one big civilwar which could engulf major world powers until it becomes a world war.
Posted by --------------------------------------- at 1:03 AM