Scandals and Intrigue Heat Up at Vatican Ahead of Papal Conclave

Scandals and Intrigue Heat Up at Vatican Ahead of Papal Conclave 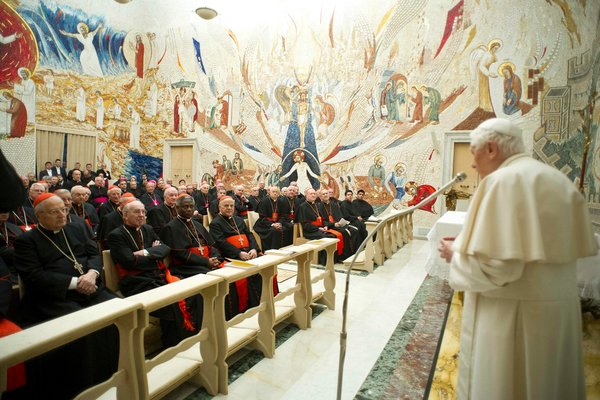 VATICAN CITY — As cardinals from around the world begin arriving in Rome for a conclave to elect a successor to Pope Benedict XVI, new shadows have fallen over the delicate transition, which the Vatican fears might influence the vote and with it the direction of the Roman Catholic Church.

In recent days, often speculative reports in the Italian news media — some even alleging gay sex scandals in the Vatican, others focusing on particular cardinals stung by the child sexual abuse crisis — have dominated headlines, suggesting fierce internal struggles as prelates scramble to consolidate power and attack their rivals in the dying days of a troubled papacy.
The reports, which the Vatican has vehemently refuted, touch on some of the most vexing issues of Benedict’s nearly eight-year reign, including a new round of accusations of child sexual abuse by priests and international criticism of the Vatican Bank’s opaque record-keeping. The recent explosion of bad press, which some Vatican experts say is fed by carefully orchestrated leaks meant to weaken some papal contenders, also speak to Benedict’s own difficulties governing, which analysts say he is trying to address, albeit belatedly, with several high-profile personnel changes.
The drumbeat of scandal has reached such a fever pitch that on Saturday, the Vatican Secretariat of State issued a rare pointed rebuke, calling it “deplorable” that ahead of the conclave there was “a widespread distribution of often unverified, unverifiable or completely false news stories, that cause serious damage to persons and institutions.”
The Vatican compared the news reports to past attempts by foreign states to exert pressure on papal elections, saying any efforts to skew the choice of the next pope by trying to shape public opinion were “based on judgments that do not typically capture the spiritual aspect of the moment that the church is living.”
Benedict had addressed at least one past scandal with the Feb. 15 appointment of a new head of the Vatican Bank. It is less clear why he reassigned a powerful Vatican diplomatic official to a posting outside Rome, though experts say it diminishes the official’s role in helping to steer Vatican policy.
On Feb. 11, Benedict made history by announcing that he would step down by month’s end. He said he was worn down by age and was resigning “in full liberty and for the good of the church.” But the volley of news reports that appeared since then appeared to underscore the backbiting in the Vatican that Benedict was unable to control, and provided a hint of why he might have decided that someone younger and stronger should lead the church.
At the conclusion of the Vatican’s Lenten spiritual retreat, Cardinal Gianfranco Ravasi, a papal contender, spoke darkly of the “divisions, dissent, careerism, jealousies” that he said plagued the Vatican hierarchy.
The recent spate of news reports were linked to an earlier scandal in which the pope’s butler stole confidential documents, an episode considered one of the gravest security breaches in the modern history of the church.
Last week, articles in the center-left daily newspaper La Repubblica and the center-right weekly Panorama, which largely did not reveal their sources, reported that three cardinals whom Benedict had asked to investigate the documents scandal had found evidence of Vatican officials who had been put in compromising positions.
The publications reported that, after interviewing dozens of people inside and outside the Vatican, the cardinals produced a hefty dossier. “The report is explicit. Some high prelates are subject to ‘external influence’ — we would call it blackmail — by nonchurch men to whom they are bound by ‘worldly’ ties,” La Repubblica wrote.
Vatican experts speculated that prelates and their associates eager to undermine opponents during the conclave were behind the latest leaks to the news media.
“The conclave is a mechanism that serves to create a dynasty in a monarchy without children, so it’s a complicated operation,” said Alberto Melloni, the director of the John XXIII Center in Bologna and the author of a book on conclaves.
Any effort to tarnish rivals is “part of the great game of the conclave, whose tools include political attacks and efforts to condition consensus,” Mr. Melloni added.
Separately, the Vatican spokesman, the Rev. Federico Lombardi, said the reports were trying to “discredit the church and its government” ahead of the conclave.
The scandals have flourished in the fertile ground of power vacuums, not only at the Vatican but also in Italy, which will hold national elections on Sunday and Monday. The end of Benedict’s papacy also dovetails with what appears to be the waning days an era dominated by former Prime Minister Silvio Berlusconi, whose media culture was marked by mudslinging.

Some Vatican experts said that recent news reports, which depict the Vatican as an unruly den of scheming Italian prelates, might convince the cardinals to choose a non-Italian pope, or someone farther removed from the Vatican hierarchy.
At the same time, other Italian news reports have seized on a petition by critics who say that Cardinal Roger M. Mahony of Los Angeles should not be allowed to attend the conclave, after the release of church files that show how he protected priests accused of sexually abusing minors.
Some Vatican experts read the media reports about Cardinal Mahony as an attempt to undermine any potential American papal candidates.

While the battle lines inside the Vatican hierarchy and the College of Cardinals are difficult to discern, in Mr. Melloni’s view the news reports calling attention to Vatican scandals could shore up the more conservative cardinals who would lean toward electing “a sheriff, not a pope,” a figure who would focus on discipline more than the pastoral aspects of the role.
Analysts said Benedict’s personnel decisions, meanwhile, appeared to reflect his own attempts to shift the power in the Vatican. The recent appointment of Ernst von Freyberg, a German industrialist and aristocrat, as the new director of the Vatican Bank, was aimed, according to the Vatican, at bringing the institution more in line with international banking standards.
And on Friday, the pope named Ettore Balestrero, 46, the Vatican’s undersecretary of state, as papal nuncio in Colombia, also making him a bishop. Technically a promotion, the move was also seen by many Vatican watchers as a way to move the prelate, who played a key role in overseeing the Vatican Bank, away from the power center in Rome.
On Monday, just days before his papacy ends, Benedict is expected to issue a law that would change the rules for electing a new pope, making it possible for the cardinals to start the conclave sooner than the traditional waiting period after the papacy is vacant.
Some non-Italian cardinals worry that might favor those who are based at the Vatican and already know each other rather than cardinals coming from around the world, Vatican experts said.
The same day, the pope is also expected to meet with the three cardinals who compiled the dossier on the stolen document scandal.
Posted by --------------------------------------- at 1:21 AM