Many Atheists Aren't So Sure: The Doubts of Doubters

Many Atheists Aren't So Sure: The Doubts of Doubters 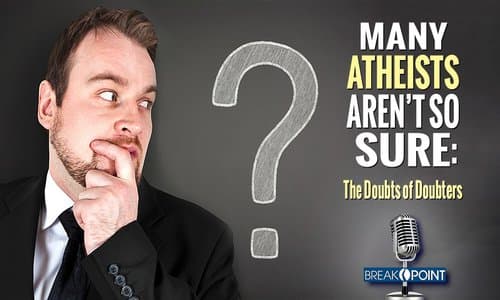 One of the most persistent challenges of the Christian life is doubt. The most faithful, and spiritually mature believers experience it, especially in the midst of trials, temptations, or hard questions.

Every one of us occasionally wonders whether God is really there, whether Christ really rose from the dead, or whether we really are indwelt by the Holy Spirit. That's natural.

None other than John the Baptist, alone in Herod's prison, sent his disciples to ask Jesus, "Are you the one who is to come, or should we look for another?" Jesus responded, "the blind receive their sight and the lame walk, lepers are cleansed and the deaf hear, and the dead are raised up, and the poor have good news preached to them."
But Christians aren't the only ones who suffer from doubt. It turns out that unbelievers, atheists, and agnostics all experience nagging uncertainties as well.

A recent poll from Newman University and YouGov found that one in five British atheists and over a third of Canadian atheists agreed with the statement: "Evolutionary processes cannot explain the existence of human consciousness."

Of the non-religious--those who aren't explicitly atheists but don't identify with any faith--34 percent in Britain and 37 percent in Canada agreed that evolution cannot explain the mind.

Twelve percent of British atheists and an astonishing 31 percent of Canadian atheists even agreed with the statement, "Animals evolve over time but evolutionary science cannot explain the origins of human beings."

Remember that atheists traditionally hold a naturalistic worldview. They believe that, as the late Carl Sagan put it, "the cosmos is all that is, all that was, and all that ever will be." In other words, matter and energy are ultimate reality.

These respondents are also living in some of the world's most secular societies. The famed "new atheists," like Richard Dawkins and Christopher Hitchens, have hailed from the U.K., where polls now show a majority of citizens identify as non-religious.
Yet nearly a third of them suffer from a persistent sense that unguided natural processes alone cannot explain the miracle of human beings, who are profoundly different from everything else in creation.

In his book, "The Reason for God," Tim Keller invites skeptics to explore these suspicions. These folks, he writes, should "doubt their doubts," reexamining their objections to Christianity and looking for the hidden beliefs underneath each.

For example, those who reject belief in spirits, angels, and God should ask themselves: If only matter exists, where does morality come from? Or what about our sense of self? If the mind is merely the byproduct of chemical reactions inside our skulls, how can it be trusted to accurately understand the natural world?

These kinds of doubts, argues Keller, can undermine doubt, itself, and lead skeptics to a new open-mindedness about God and the claims of Christianity.
As C. S. Lewis might say, atheists really can't be too careful. He argues in "Mere Christianity" that it's normal for believers to sense that the Christian faith looks "very improbable." But these moods aren't unique to believers. "When I was an atheist," he confesses, "I had moods in which Christianity looked terribly probable."

That's why Lewis defined faith as "the art of holding on to things your reason has once accepted, in spite of your changing moods." It's also why Christians shouldn't be afraid of reason or evidence.

We should engage our doubts with confidence that our worldview--unlike the secular one--has the resources to explain both the natural and the supernatural aspects of the human experience.

In both cases, doubt--counterintuitively--can lead to faith.