"Some Middle East analyst suspect that the U.S. helped finance this pipeline knowing that IF Iran is attacked by either Israel or the U.S. or both, that Iran would obviously shut down the Strait of Hormuz oil route to all oil tanker traffic, as a retaliation response, which would cause a major and costly interruption of oil exports from the Middle East."
http://www.bbc.co.uk/news/world-middle-east-18848986 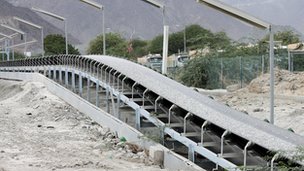 The overground pipeline can handle at least 1.5 million barrels of crude a day
Continue reading the main story

The United Arab Emirates has opened and begun operating a key overland pipeline which bypasses the Strait of Hormuz.

Iran has repeatedly threatened to close the strait at the mouth of the Gulf, a vital oil-trade route.

The new 370km (230 mile) pipeline carries oil from fields in the UAE's western desert to Fujairah - a major oil storage hub on the east coast.

With initial handling capacity of 1.5m barrels of crude a day, it gives the UAE direct access to the Indian Ocean.

The state-run International Petroleum Investment Company behind the project confirmed that the first export shipment was loaded onto a tanker through the pipeline on Sunday, the Associated Press reports.

UAE oil officials and executives from major oil firms including ExxonMobil, Shell and Total gathered on the country's eastern coast to open the pipeline route.

The UAE hopes to increase exports via the new facility to nearly two thirds of the daily 2.4 million barrels it exports.

"This is a very strategic project, it gives the options to our clients to transport larger quantities [of oil]," UAE's Oil Minister Mohammed bin Dhaen al-Hamli said, adding that the project provides an "alternative" trade route for oil.

Currently, nearly one fifth of the world's traded oil travels via the Strait of Hormuz which Iran has repeatedly threatened to close in retaliation for sanctions over its controversial nuclear programme.

Officials repeated the threat again over the weekend.

Until now, the UAE - like Qatar and Kuwait - had been entirely dependent on Hormuz to export its crude.