Obama will skip APEC in PRussia

Obama will skip APEC in PRussia

President Obama will not travel to Russia this year to attend the APEC summit, according to White House spokesman Jay Carney. 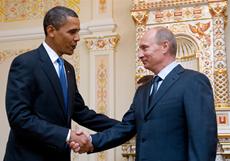 The Asia-Pacific Economic Cooperation (APEC) summit is scheduled for Sept. 1-8 in Vladivostok. Obama is scheduled to accept the Democratic presidential nomination at the party's convention in Charlotte on Sept. 6.

Media reports have suggested that the relationship between Russian President Vladimir Putin, who was recently reinstalled into office, and Obama is off to a sour start. Putin decided to skip this week's Group of Eight summit at Camp David, Md., but Obama and the Russian leader are likely to meet on the sidelines of the Group of 20 meetings in Mexico in June.

"The fact of the matter is we have a comprehensive relationship with Russia that's built on working together in areas where we agree, and that has borne significant successes, that approach, and then be very clear about where we disagree but not letting those disagreements undermine the overall relationship," Carney said. "And that was true under President [Dmitry] Medvedev when Vladimir Putin was prime minister, and it will continue to be true now that Mr. Putin has returned to the presidency and Mr. Medvedev is now prime minister.

Obama made clear during his meeting with Medvedev on the sidelines of the Nuclear Security Summit in Seoul in March that he wouldn't visit Russia until after November.

"I wish him all the best," Obama said during his meeting with Medvedev. "And I would love to visit St. Petersburg. He is absolutely right that my next visit to Russia will undoubtedly be after my election."

His comment tipping off that he'd skip APEC was perhaps overshadowed by a "hot mike" incident. In a comment he hadn't intended for mass consumption, Obama told Medvedev during their Seoul meeting that he would have "more flexibility" after the November election to take on the sticky issue of building a missile-defense system in Europe.